Gosh momma and I are falling way behind in our blogging! I think it is because we keep taking so many fun adventures we are having to do real-life and then plan the next adventure which doesn’t leave a lot of time for writing about past adventures. I know, POOR us! 😜 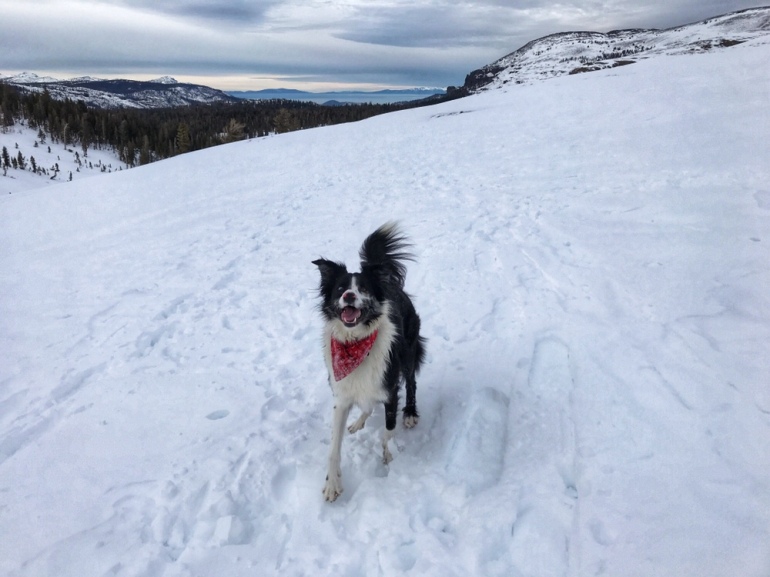 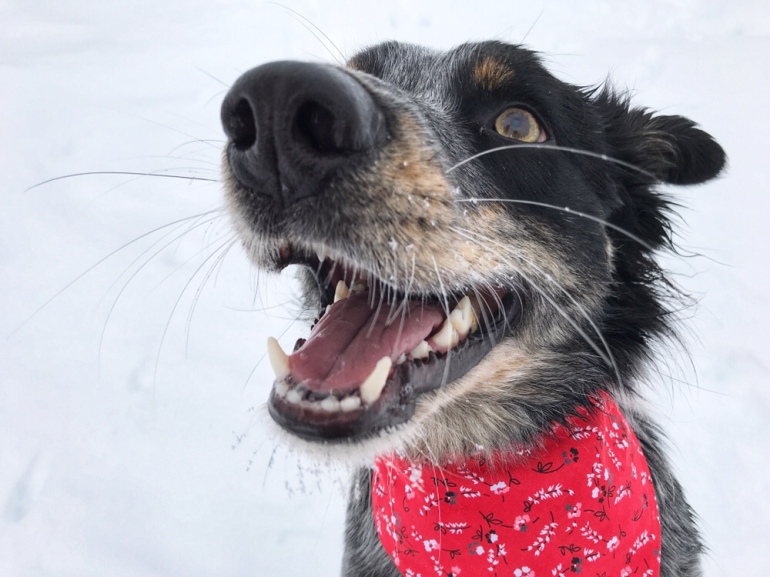 Last Monday momma wanted to see what the snow looked like up by Carson Pass because that was the beginning of our current ‘heat wave’ that will be going into the foreseeable future here. It was supposed to be a partly-cloudy day but when we drove up to the parking lot momma got a little worried that the clouds looked like they may be full of rain! And yes, rain because it was 50 degrees even up at 8500 feet. We are totally getting skunked on winter in the Sierra this year. 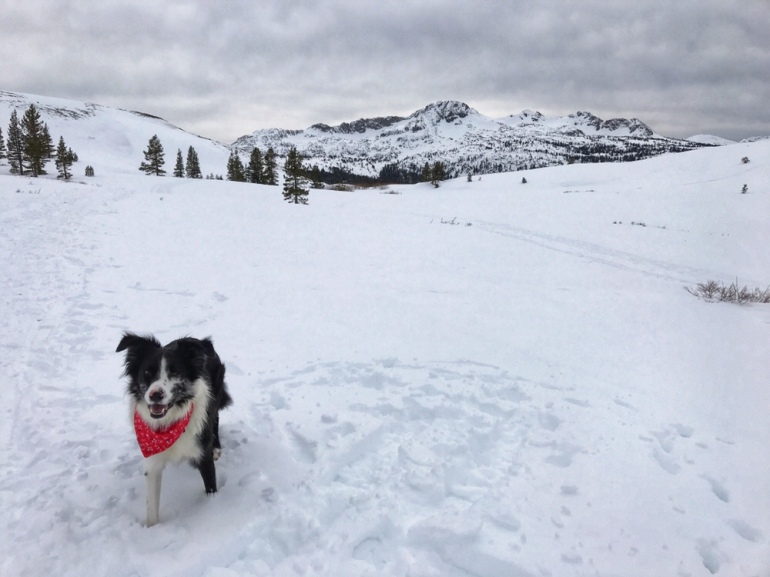 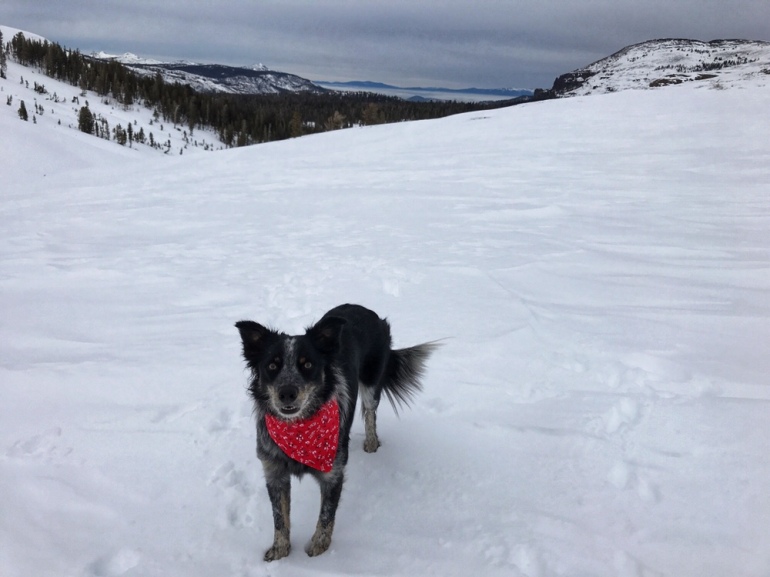 There was enough snow for momma to snowshoe, so she strapped them on as soon as we got out of the parking lot and started the climb to drop down into the meadow. The climb has the potential to be a lot of fun in fresh powder, but because of the warm weather and then below freezing temps at night, it was very crunchy. 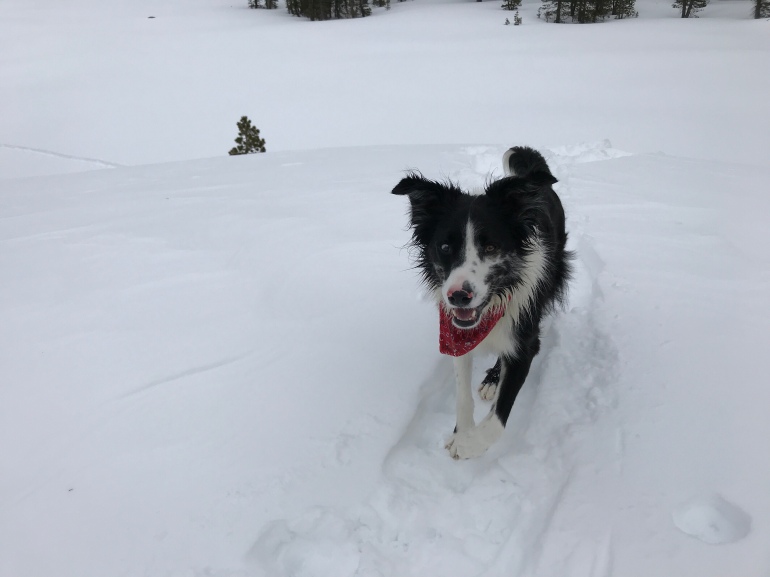 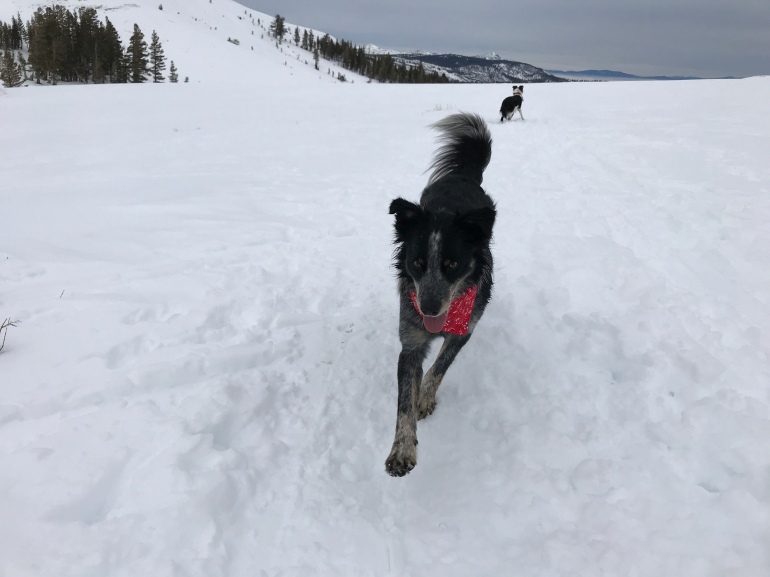 Lolo and I had a lot of fun picking out which path we should take. We have done this hike in the non-snow and in a little snow, so to do it in snowshoe snow was no problem since we were accustomed to having traveled here before. 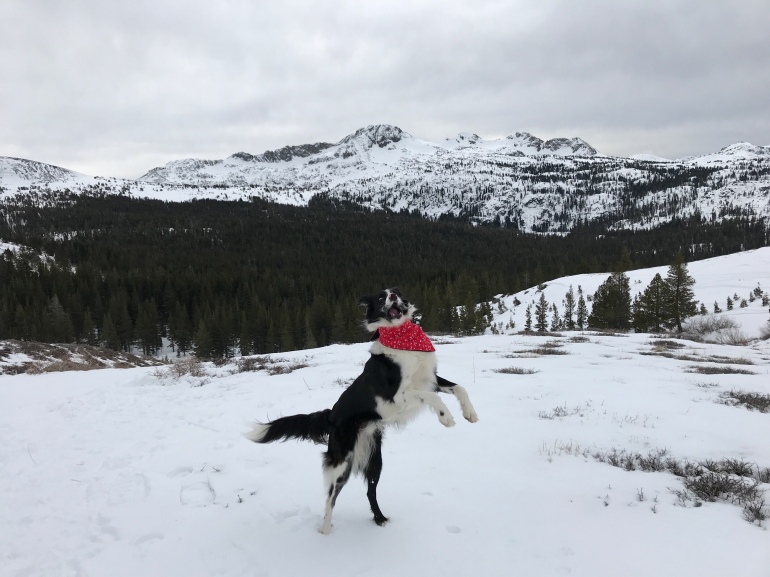 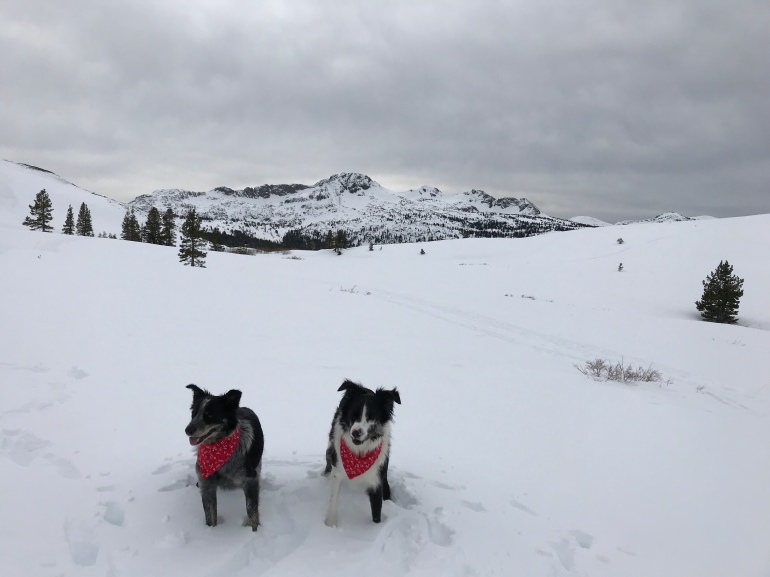 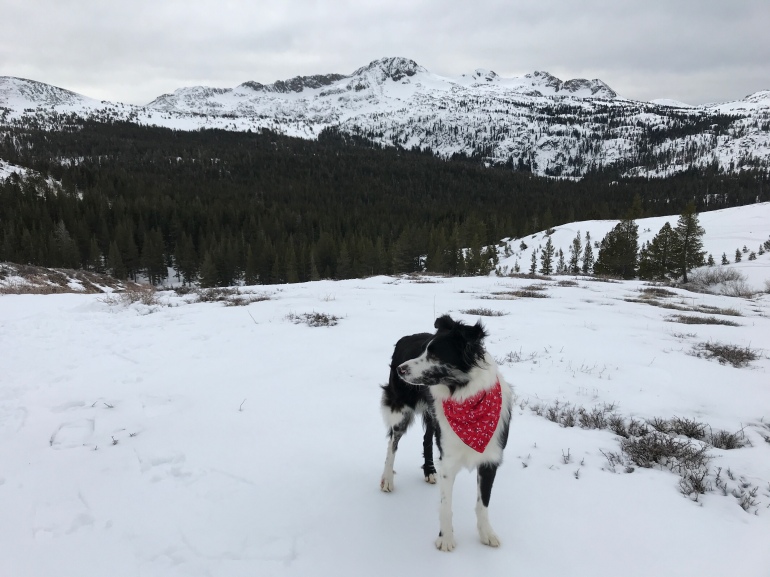 The views from this hike are pretty spectacular, which is why momma likes to come. She also enjoys that there is a big meadow for us to explore, and you can see from a distance in lots of areas if people are coming. Since Lolo and I can be surprised by people on skis, we have to be extra careful and close to momma when she can’t see super far ahead to make sure we don’t get into any trouble! 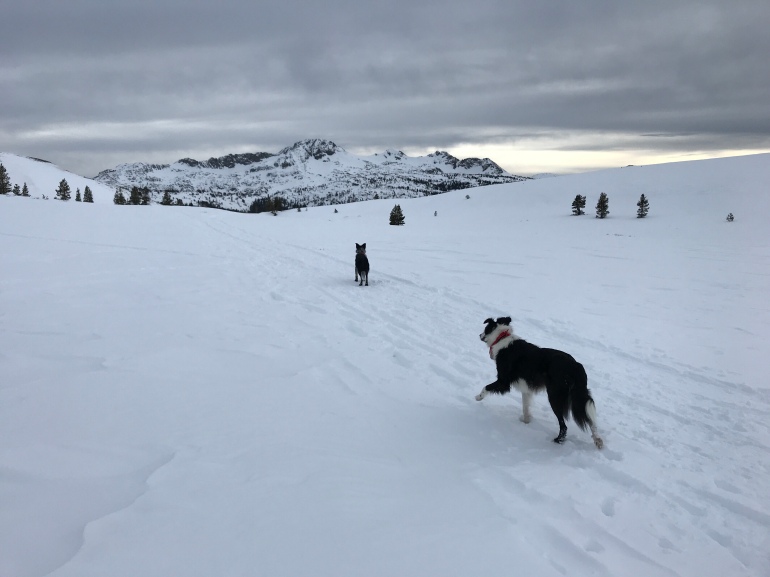 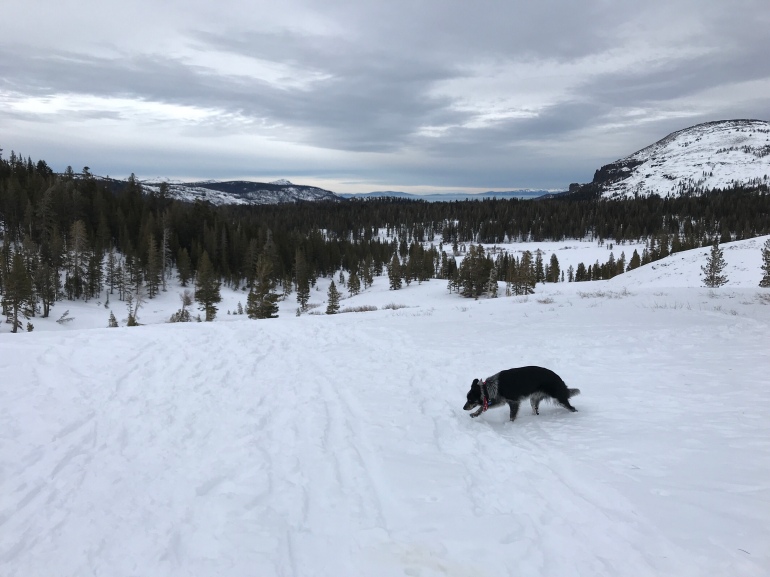 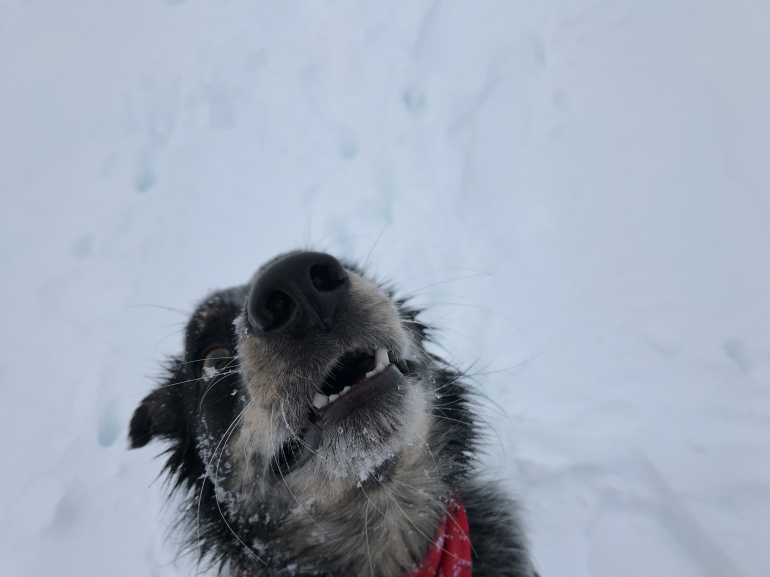 Down in the meadow there is a historic old cabin and barn owned by a family that used to own the meadow for grazing land. It was around this cabin where momma heard voices and spotted a couple of people and a tent across the meadow down by the junction for the trail to Showers Lake or the Tahoe Rim Trail that goes down to Round Lake (and all the way back to Highway 89 for people who want to do a through-hike). 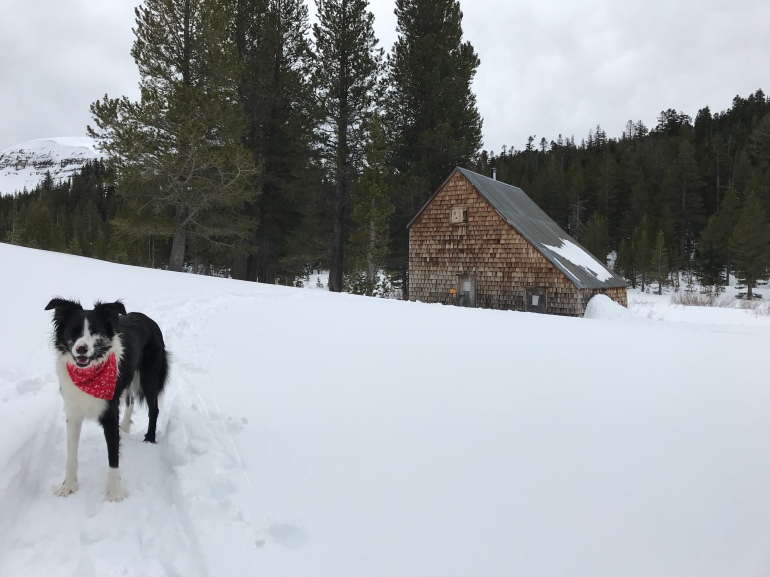 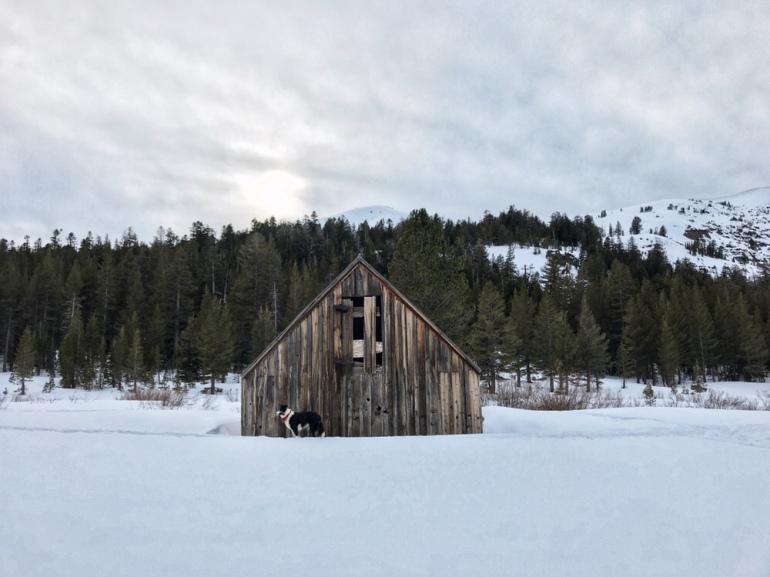 Momma leashed up Loki just to be careful in case the people were on skis and as we got closer, one of them called out momma’s name. Momma thought “I wonder if it is those ladies we once met here and were hiking with?” but it turned out to be another lady momma knew and worked with on the computer many years ago, who is her friend on Facebook. She lives in a nearby town and was camping there in the meadow! So it was the first time momma got to meet her in real life! The funny part was that she saw Lolo and I running around in our bandanas and since she sees pictures of us online she thought “hmmm, that must be Maija because her dogs wear bandanas” (and because we are known to frequent the Tahoe area!). So basically Lolo and I are internet stars is the takeaway I have! 😂 BTW, the reason Momma puts us in bandanas is so she can keep track in her pictures of what day it was and what we were doing. 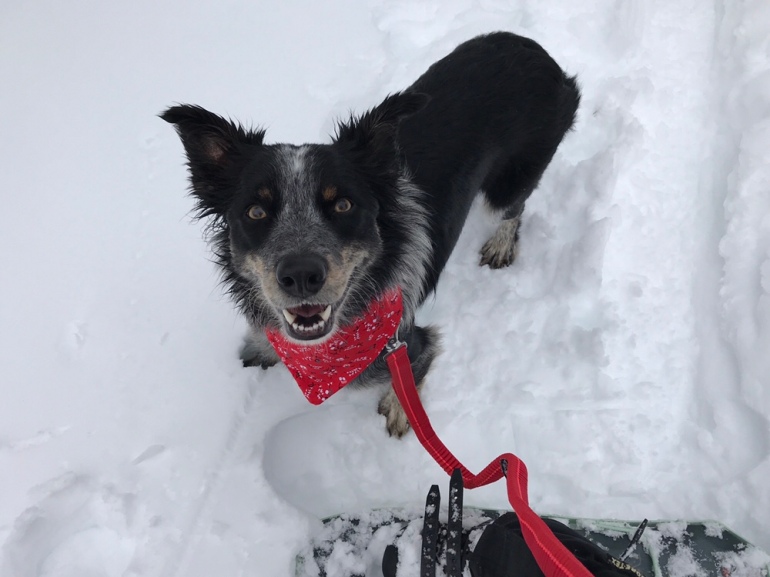 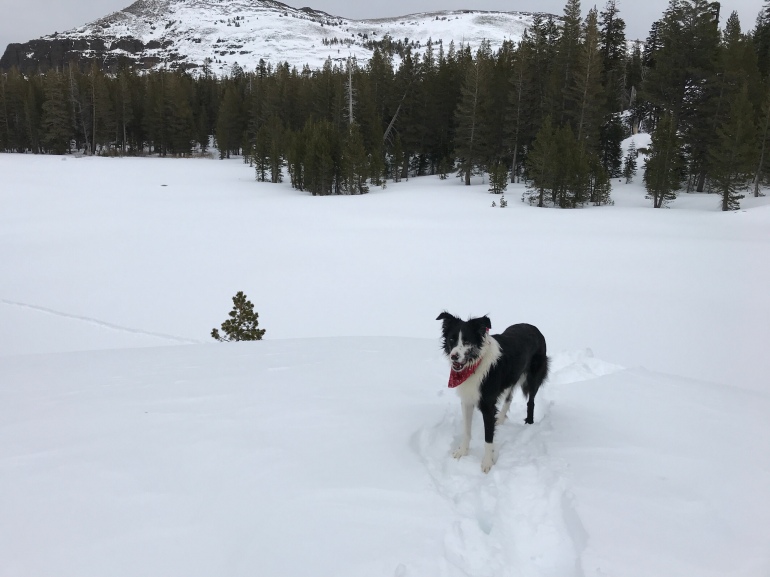 Since Lolo is very nervous around people that are trying to meet HIM she asked them to ignore him as we approached, which is the magic trick for Loki to not bark at people and be scared. Momma gave her friend a hug and met her friend’s friend (who lives in the Tahoe area and is super into adventure stuff like us!) and proceeded to have a chat with them while Lolo and I wrestled. Of course we only wrestled and banged into momma’s friends and not our momma, but they were on snowshoes so no-one got hurt! 😬 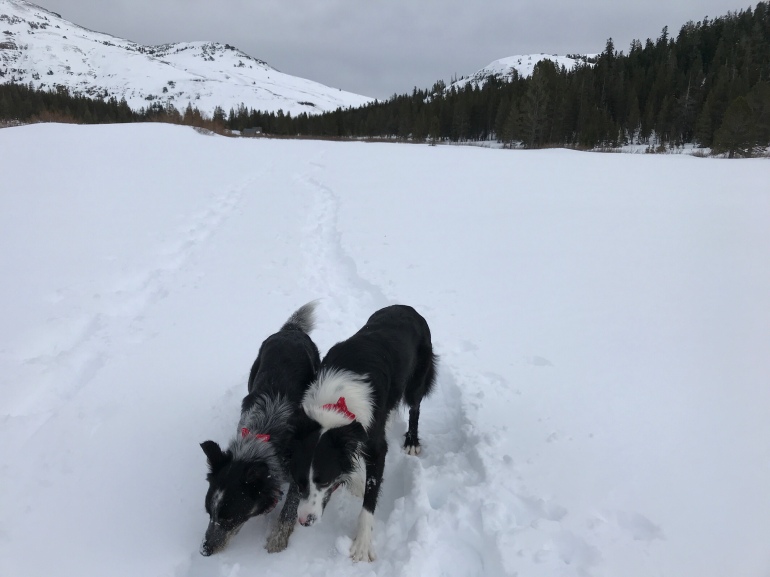 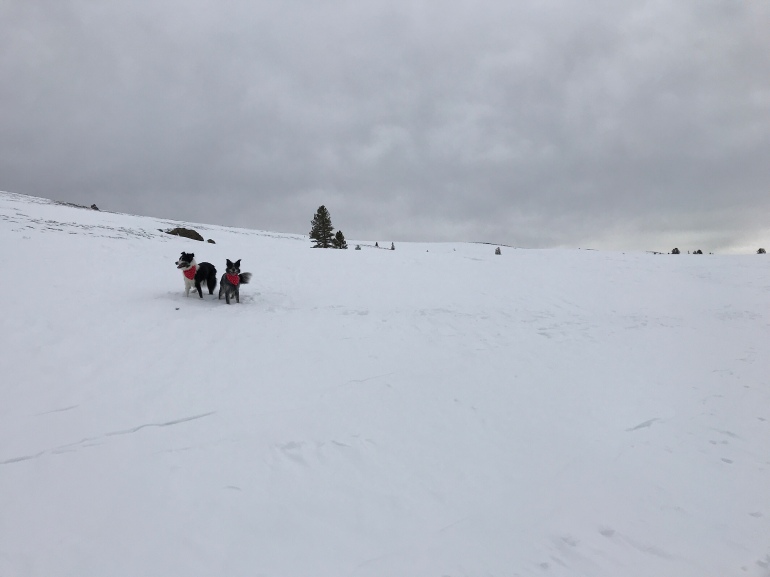 Since we had gotten a late start on our snowshoe (because I insisted on a long walk before breakfast and Lolo had to play with a friend at the park before we left) momma had to say goodbye after almost 45 minutes of talking and we kept moving and split the trail to go down into what is normally a mushy wetland meadow and out the back side of the meadow in a loop. As we made our way back to the car we saw nobody! It was a nice day of play and snowshoeing even though we didn’t get back to the car until almost the sun was going down. The good news about that was then we had no rush-hour traffic to get through in Sacramento! 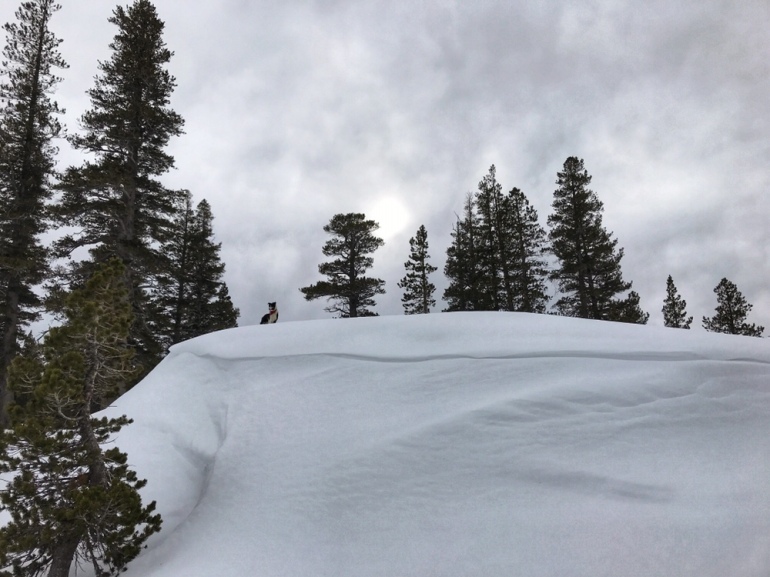 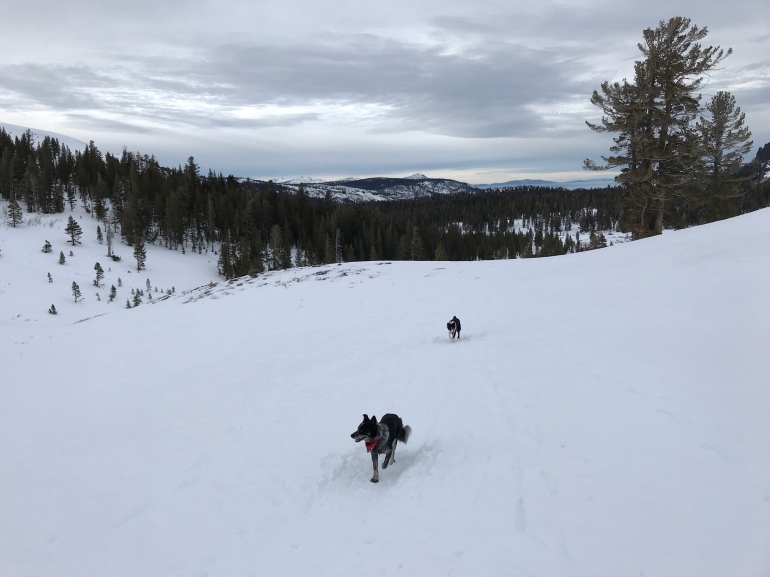 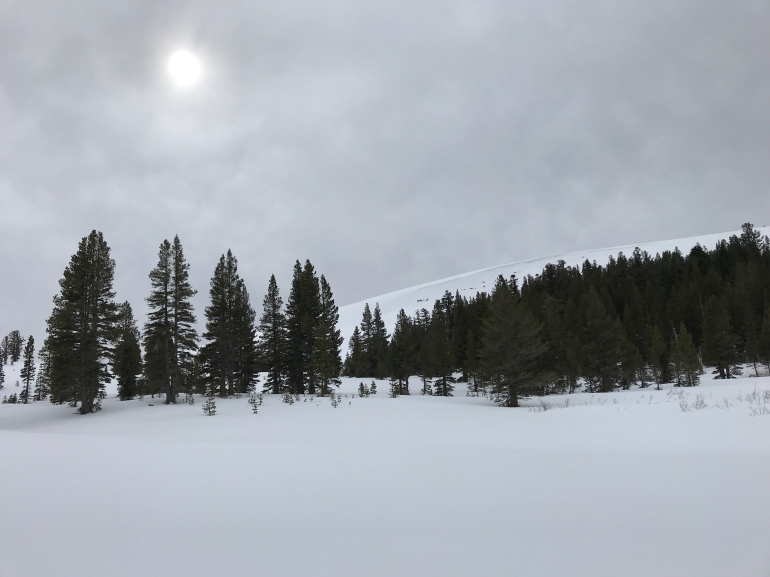 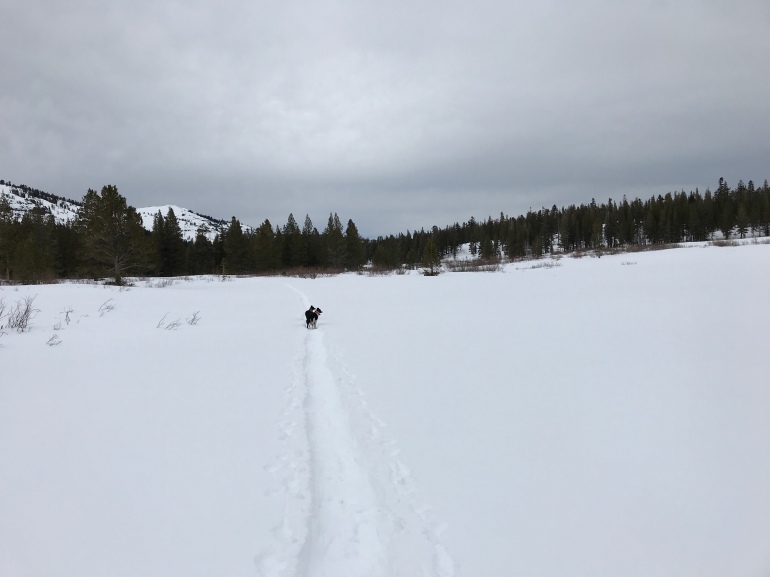 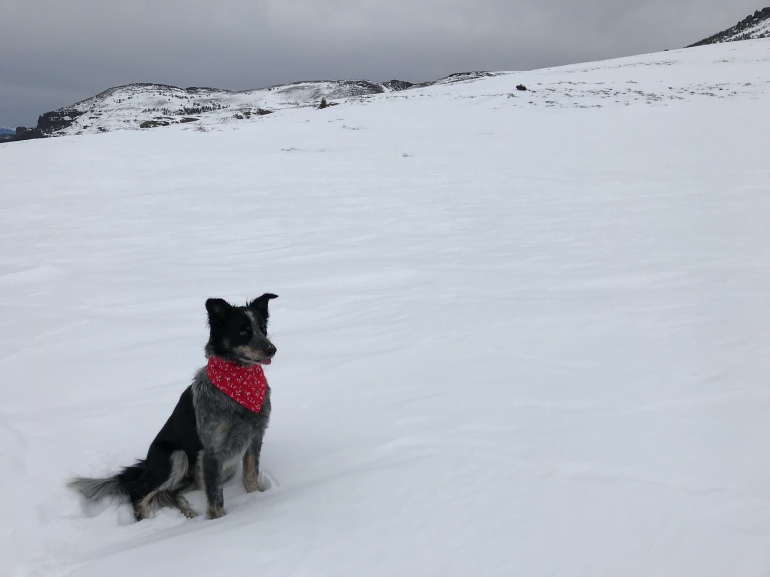 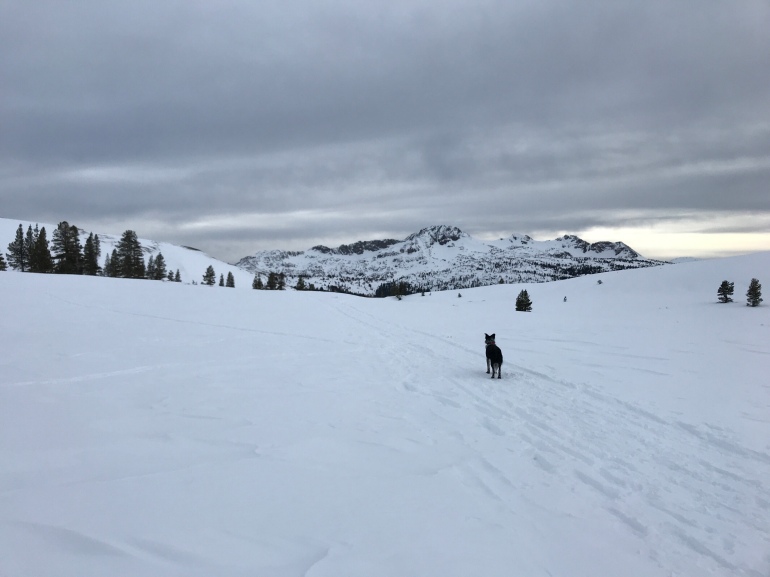 I am not sure when we will go back up to Meiss Meadow since the temps have been so warm in Tahoe and there is no snow in the forecast through at least the next two weeks. It is one of the lowest snowfall years in Tahoe for a while, so we are hoping that there will definitely be a few more big dumps later in the season! We got to California just as the drought was over and don’t want to be here for another one!! 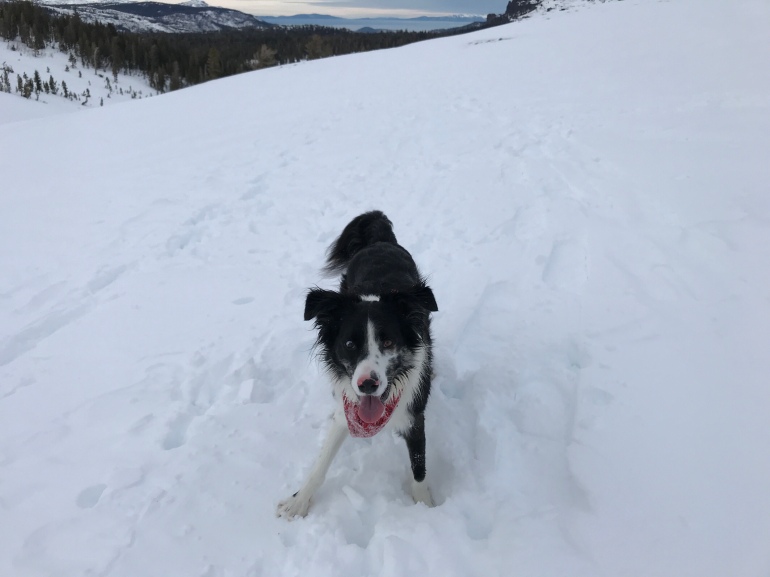 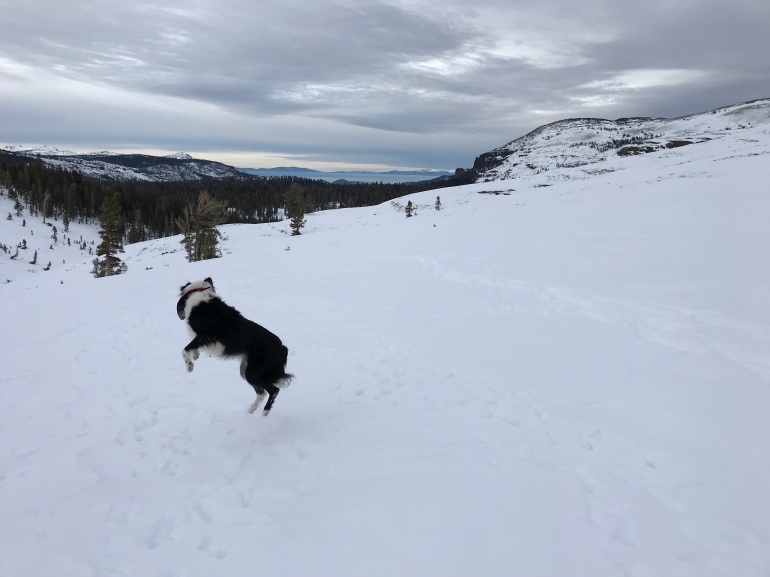 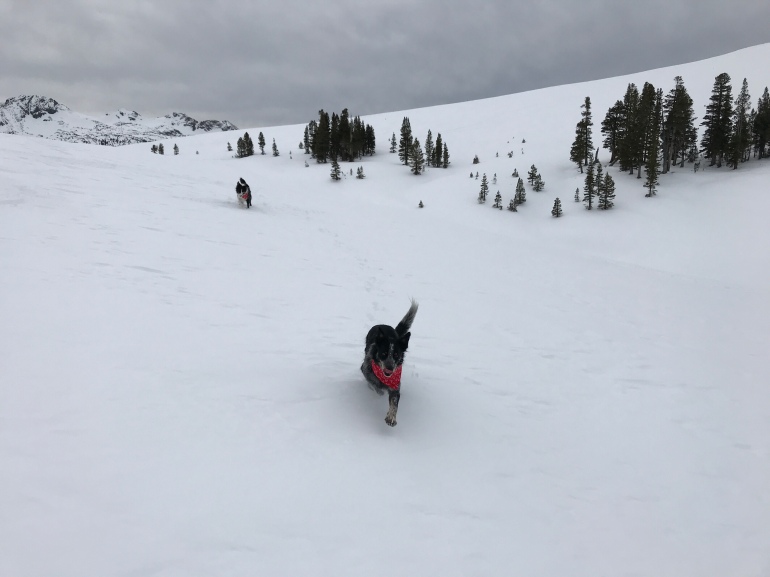 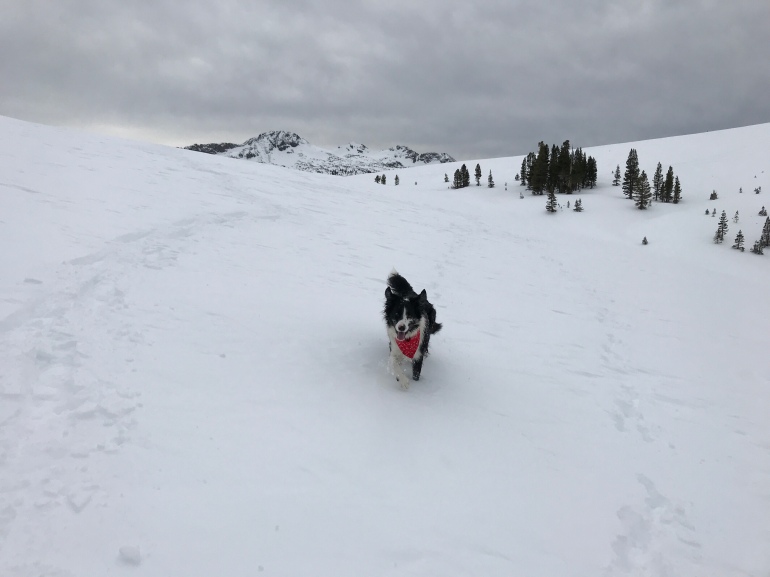