The other day momma got a new attachment for our Subaru adventure-mobile, one that is supposed to make it easier to carry a SUP on the roof. Momma wanted one because any other time we have strapped a SUP to the roof to go paddle somewhere she is totally worried and freaking out about it blowing off and has to constantly pull over to check and make sure it is still tied down tightly, etc. Basically driving with it made her freak out the whole time, so it was never really that fun. When she first started SUP-ing we lived on a lake in North Carolina, so we never had to travel with the boards anywhere! 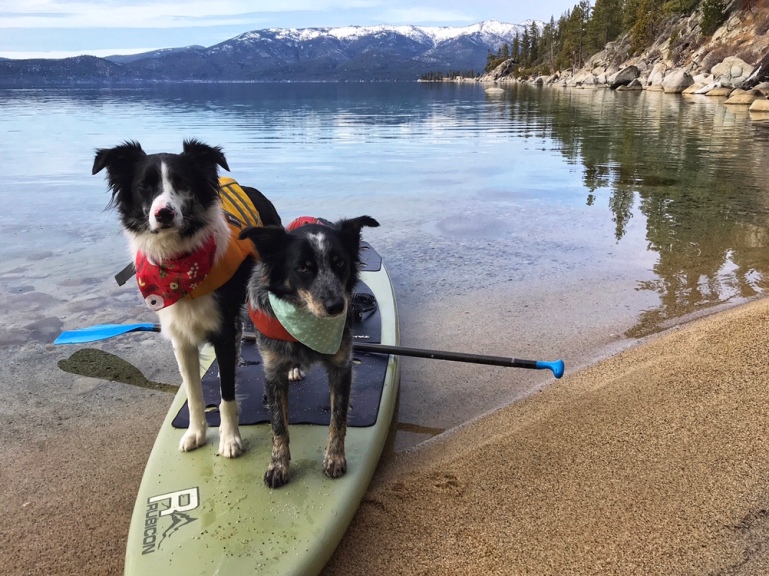 With our inflatable SUP it is no big deal to take along IN the car because it packs down into a backpack and we just throw it into the back. The thing we don’t like as much about the inflatable SUP is how light it is with all three of us on the board – it doesn’t feel as stable as the hard board when someone is moving around – in addition to the fact that the loud hiss of air it makes when inflating and de-flating makes me run for the hills 😬 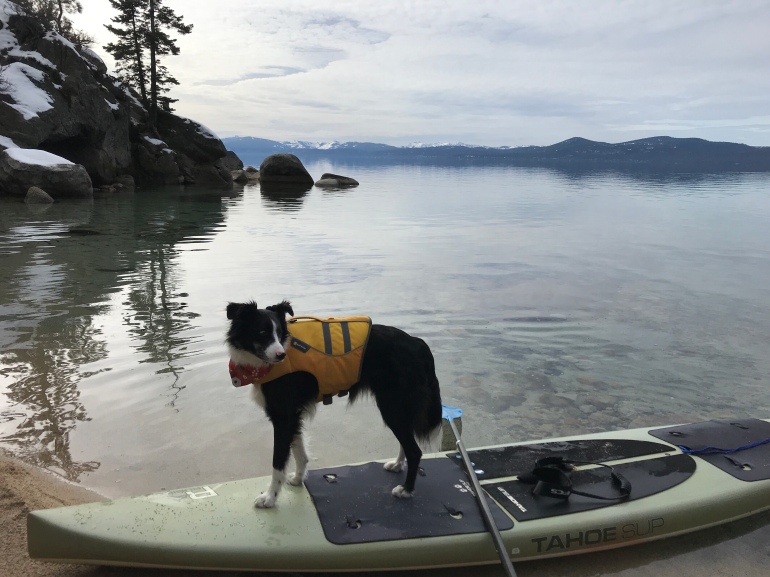 Momma ordered a Thule SUP Taxi and installed it onto the car and was excited to get it tested out because our weather in Tahoe for the next few weeks is warm, sunny with highs in the 50s. Which means it’s a great time for us to get onto the lake at access points that aren’t normally open to walking dogs across the beach during the summer time! 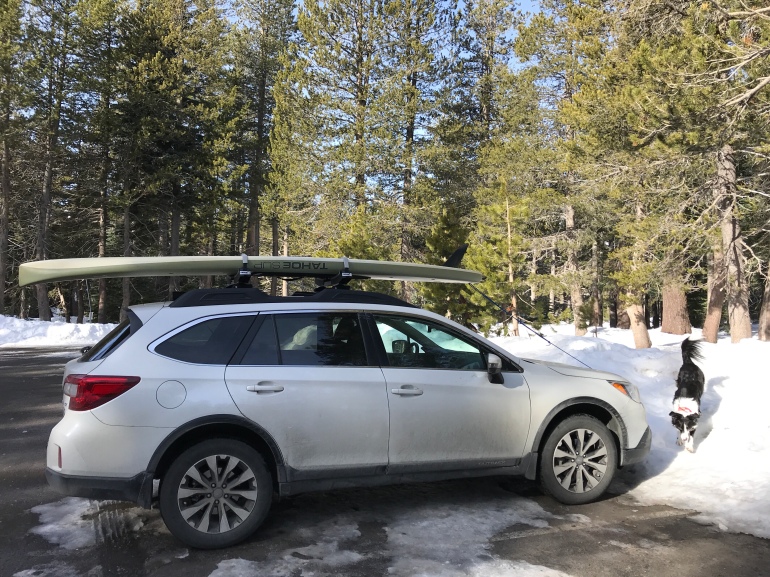 She wanted to check out a new area on the lake for the SUP part of the day, but didn’t want us being little nutters in the car while she got everything set up. The solution for that is simple: take us out on a hike beforehand! Even better, take us to the snow! 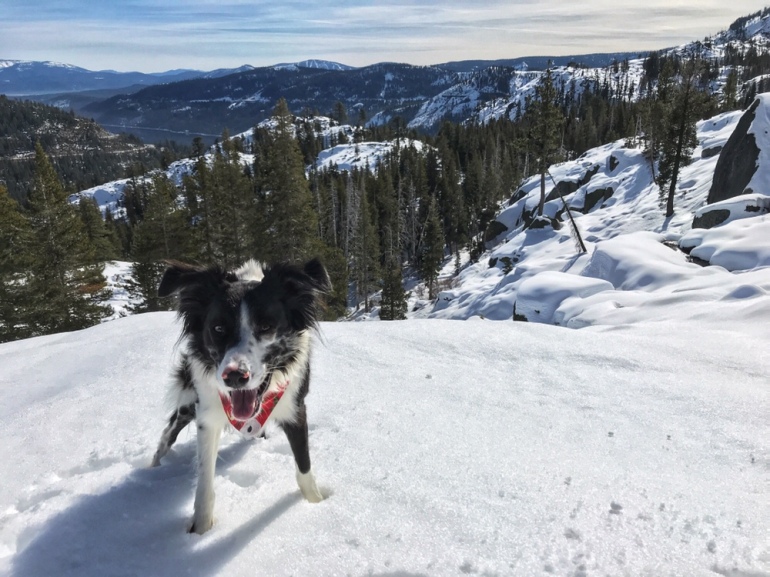 The easiest solution was to head up to Donner where there is still plenty of snow even with the warm temperatures. Momma wanted to take us onto a loop and we headed out following the nicely packed snowshoe trail (since I told her very clearly I did NOT feel like breaking trail this morning). When we got to the junction where you turn left and go downhill to make the loop we were surprised to see that no-one has gone down and broken the trail! In fact, the only snowshoe trail that had been made was the one we made almost a week ago after the HUGE snow (see my POW day post which is all about how it took us 4 hours to go 4 miles in that deep snow!!).

Since I had aleady made it clear that I did not want to break trail momma took us out back to Azalea and then Flora lake where we had a great time playing with each other and digging for chippers. When we pulled into the parking lot we were the first car there which makes momma always relax about letting us run a little further out than normal since we know there is no-one ahead of us. She worries we may be weird when we see people skiing, which is a fair thing to worry about since sometimes we do say to her “WHAT THE HELL IS THAT?” when we see one! 🤣 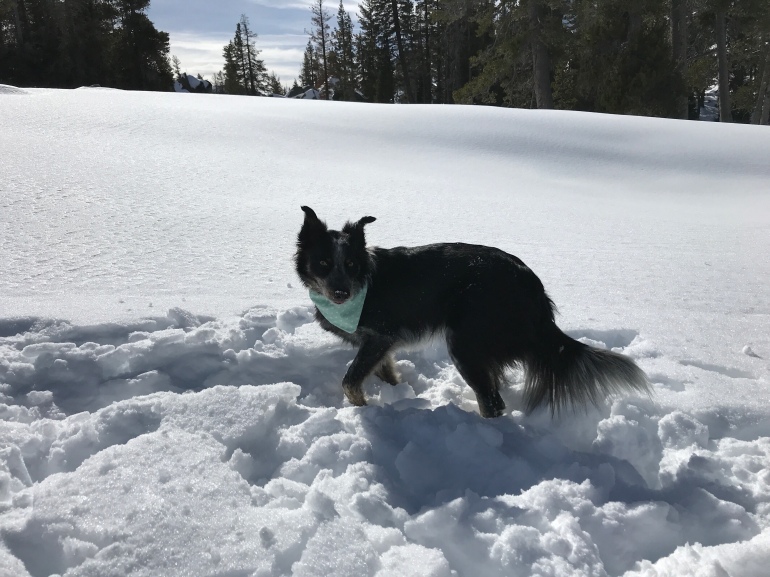 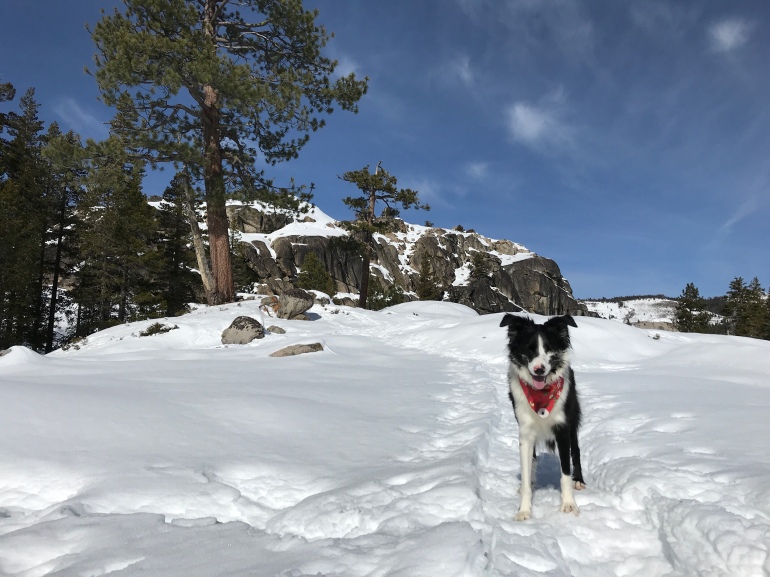 Anyways, at the end of the trail (believe me we have tried to make a loop from here by practically rock CLIMBING in the summer and not made it) we back-tracked to the car and momma started heading for the lake. We had a nice nap as we made our way to Sand Harbor State Park. There is an entrance fee there and luckily momma had the correct change because it is winter so no-one is manning the booth to make change for you! Which is definitely something I need to remind momma about so she has another tenner ready to go in case we go back!

She then got the board down by the lake and got everything organized before putting us on leash to go get on the board. According to her research, dogs are only allowed at Sand Harbor State Park during the off-season and they have to be on a leash. So we made sure to follow the rules even though momma is 100% sure she has seen dogs here totally off leash running on the beach 🙃 but we can’t talk since we are rule-breakers all the time too! And she was planning on taking us to a beach where we could be off leash legally. 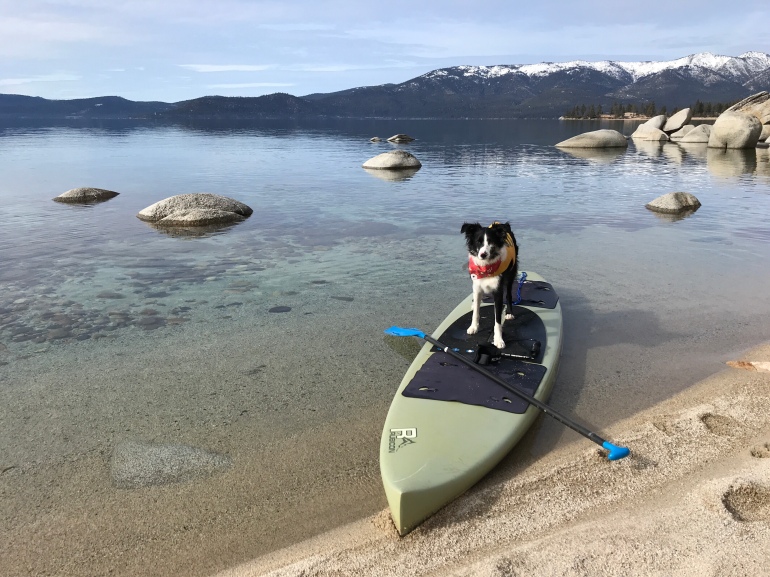 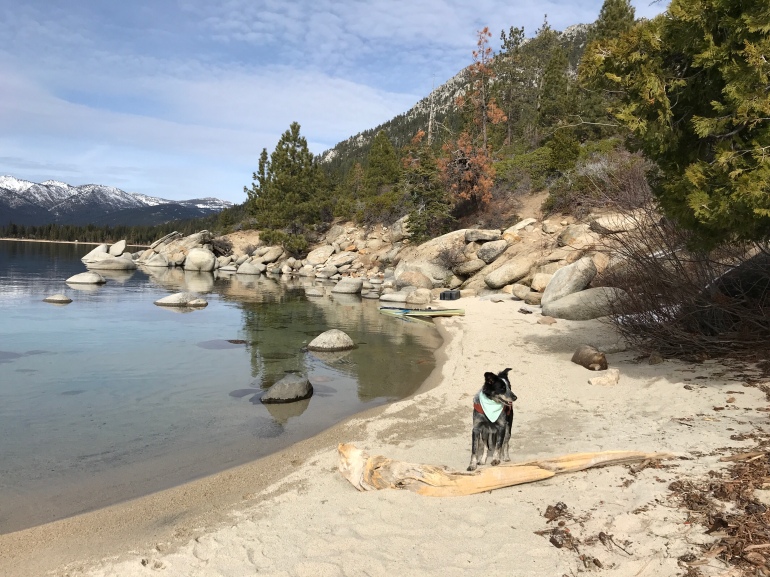 Actually, it was probably a good thing we were on leash because a group of young adults came RUNNING up to us as we were trying to get onto the board to ask momma a bunch of questions. Being the dogs we are, we don’t really appreciate people running up to us like that, (especially Lolo) but we were perfectly behaved and quickly on the board and away from shore. 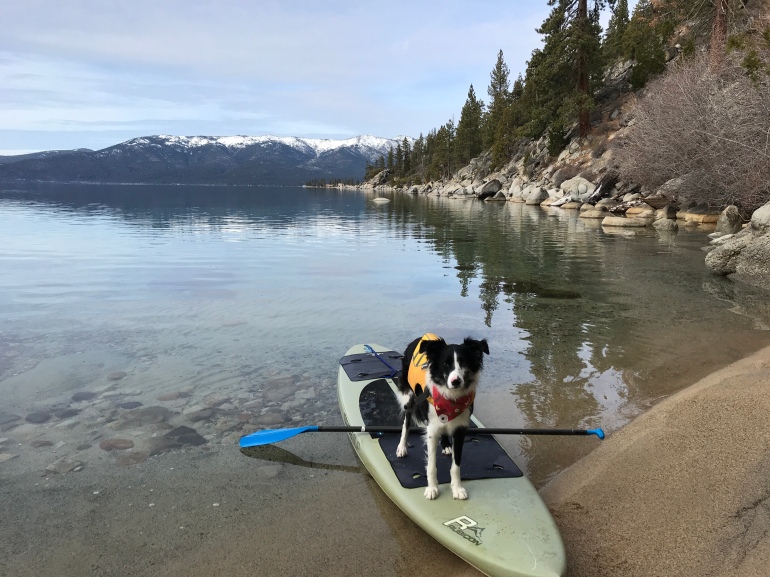 Since I have decided it is easier to ride on the back of the board by myself (rather than up front where I used to ride) momma never gets to see my smiling face while we paddle. I moved to the back of the board because we had several outings where I tried to hold my ground on the front and Loki was a little too shifty and he’d bump me and I’d fall into the water. And I don’t want to go swimming when we are SUP-ing, I want to just enjoy the scenery and hang out! Lolo seems to be a little calmer when he is up front by himself anyways, so it is a lot easier for all of us. Momma only is sad she never gets pics of me on the front of the board now, but I don’t really think she should care about that! 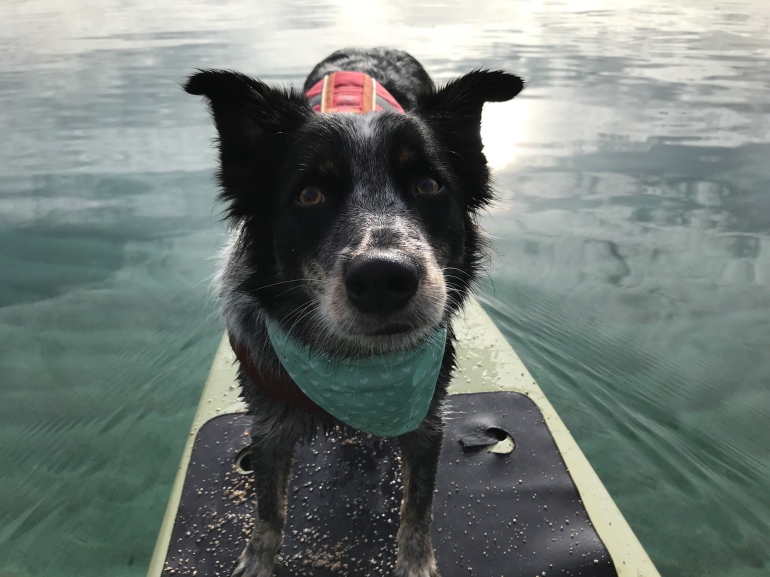 We paddled first around the corner of Sand Harbor to the beach area before we turned around and headed south. Momma had it in her head that we would go down to Chimney Beach, even though she didn’t really know how far away it would be. I swear, I don’t know how we always manage to have adventures and never get into trouble with her level of planning (or lack thereof)!! 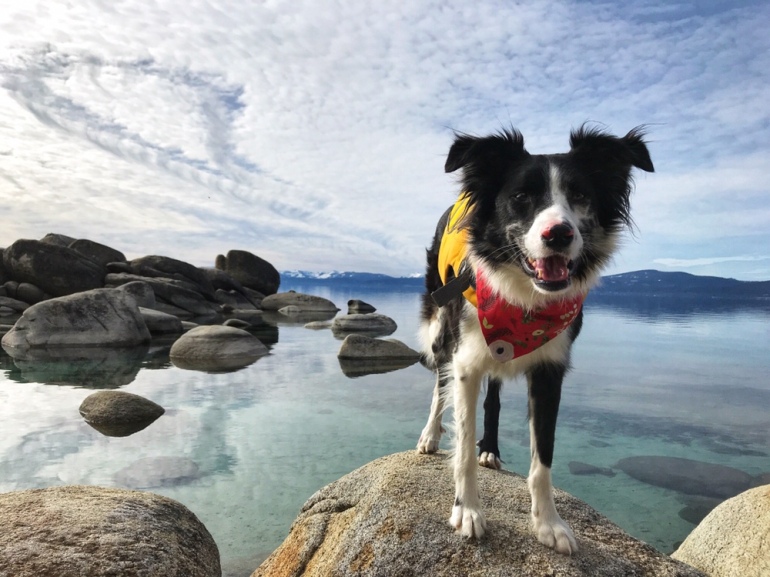 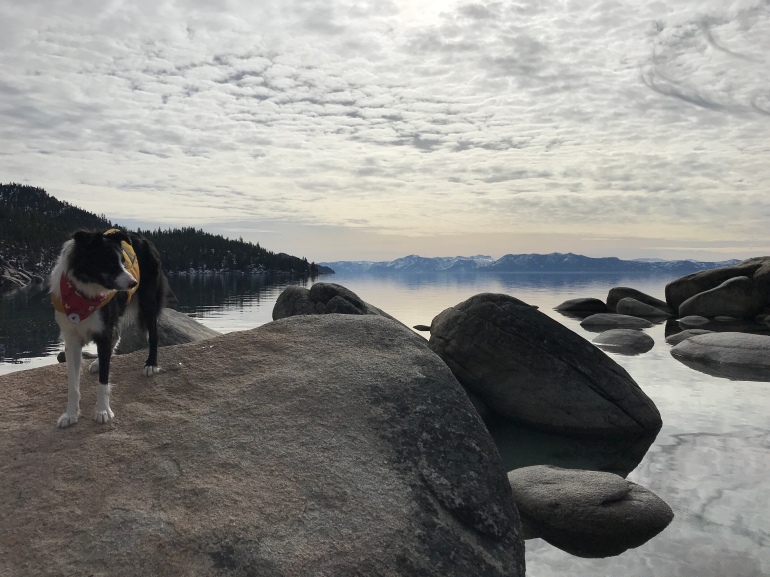 As we paddled south momma kept us close to the shoreline so that we could look at all the amazing rocks you can see everywhere in the water. She has to really pay attention while paddling here though because there are lots of surprise rocks that are JUST below the surface that you can’t see until you are almost on top of them, so we hold on tight while she maneuvers sometimes sharply around them so we don’t hit the fin on anything. 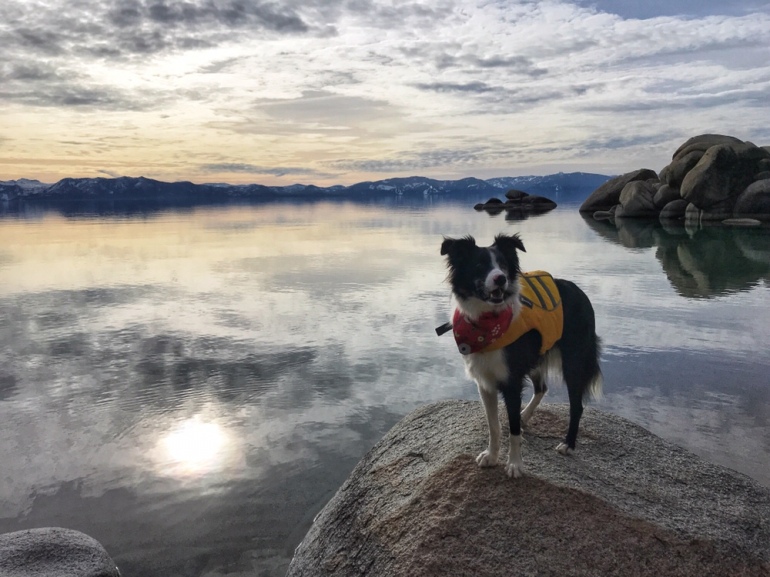 Lolo being relatively newer to paddle boarding likes to take breaks, so momma stopped at two different beaches on our way to Chimney Beach. At the first one near Bonsai Rock we met three kayakers who were also Border Collie people. Momma actually stood on the board and had a whole conversation with them while we were paddling around all these rock islands that were out there. She thinks it is funny how Border Collie people always tend to meet Border Collie people!

She also took her time paddling around this crazy castle-looking complex that she thought looked really neat – turns out is called the Thunderbird Lodge and has some prime time real estate!! We finally made it to Chimney Beach and momma was surprised to see it took us three miles to get there. Time flies when you are having a perfect paddle day with no wind and so much to look at! 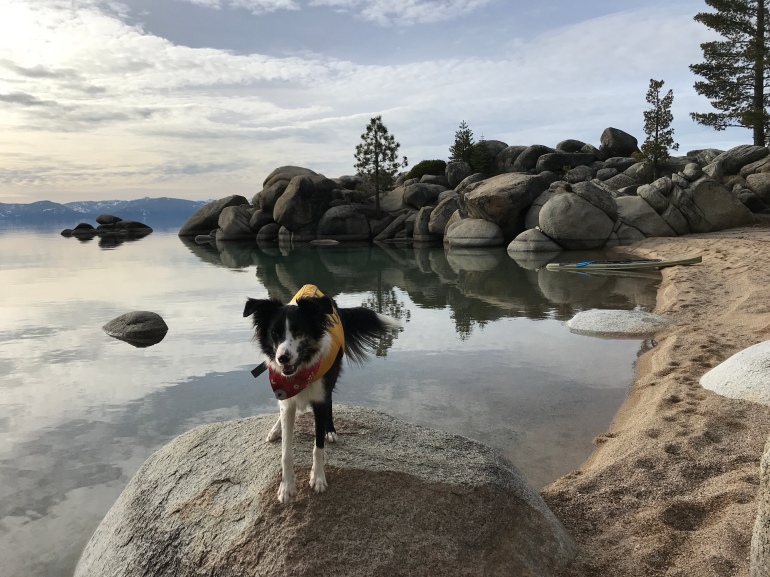 At Chimney Beach we took a long break to have a snack, sniff around, pee on stuff and throw the stick for Lolo. Momma meant to bring a ball but with all the things she had to pack in the car for a snowshoe and a SUP with both Lolo and I, the ball must have fallen off the list! It’s OK though, he can make do with almost any object that is throwable. 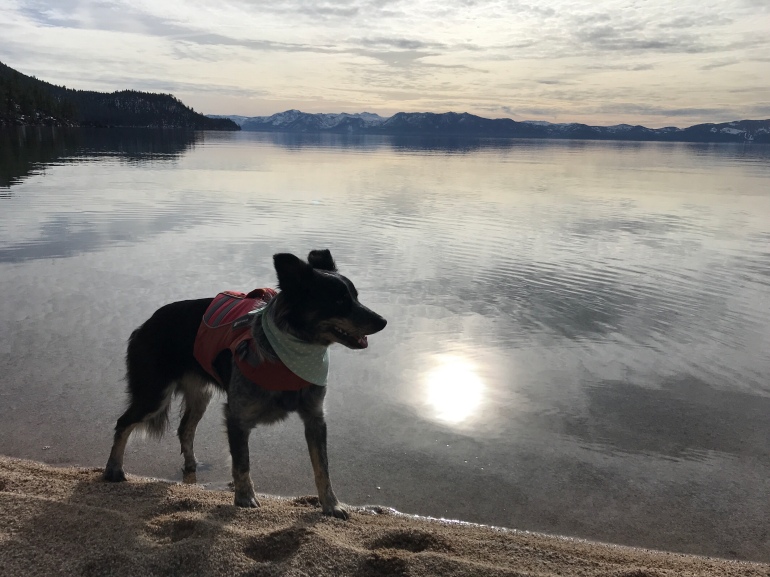 Momma decided we should start heading back just in case the wind suddenly picked up or something like that, since it was January it seems prudent to not be an idiot while paddling out on Lake Tahoe!

We didn’t make any stops on our way back and so I actually laid down to relax (which I NEVER would do on the front of the SUP) so momma wonders if perhaps the back really is better for me? 🤔

She just couldn’t bring herself to pull right into the beach though so she took us back around the point of Sand Harbor before she finally landed us on the beach. She just kept saying how BEAUTIFUL it was and what a PERFECT DAY it was and how we are just the BEST BOYS ever. Once we were finally back on the beach she let us walk down to the end and back (taking pictures of course!) before we got to go back to the car to take off our float coats and sleep while she packed everything up.

All in all it was an AMAZING day. Momma even said the sunset was amazing, and pulled over to take pictures in Truckee near the Martis Creek hike we did last weekend (which is still on my ‘to do’ list to blog about!!!). I know she’s already got the bug to go back and paddle because I busted her looking at the weather (and wind reports) today. With this weather I don’t know how many more two-sport adventure days we will get though because I don’t know how long the snow will stay when it is in the 50s and so sunny (and let me tell you the sun in California is much stronger than the sun we had in North Carolina!). Not to mention that it is exhausting (for all of us) but so totally worth it just because you CAN. 😊 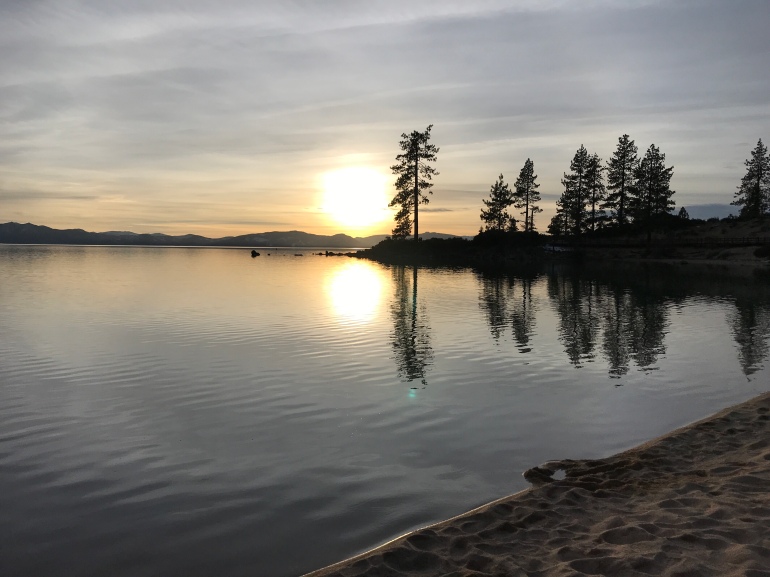 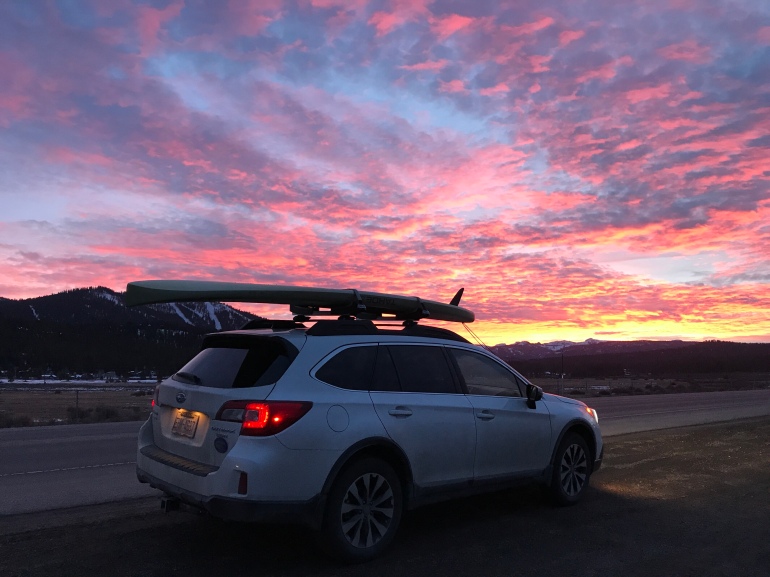 A snippet of videos from our day (yes we started out with a long walk and romp from Davis: