We went up to Tahoe for momma’s birthday, which was on a Saturday and mother’s day, which was on a Sunday. The weather was absolutely pristine and the paddle conditions were as darn near perfect as you will ever see. Momma and I took advantage of the opportunity to log some SERIOUS SUP miles on our Tour de Tahoe quest (we paddled more than 30 miles in 3 days!). 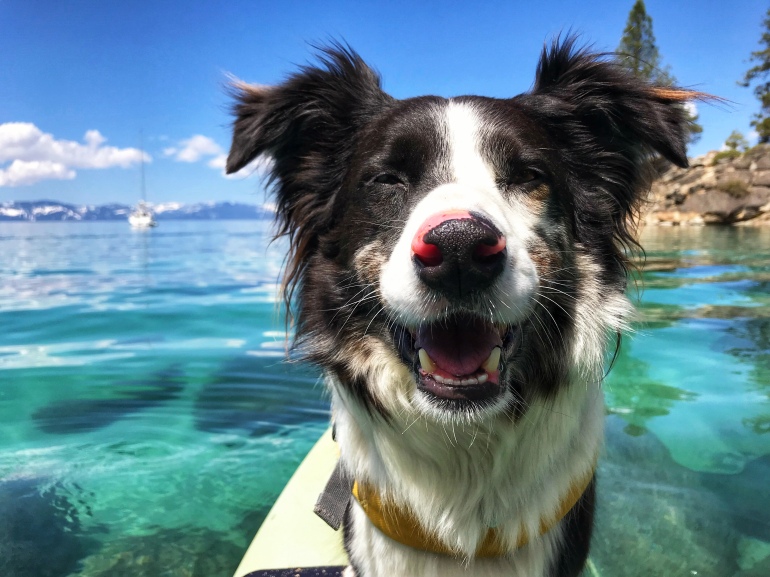 The first one I am writing about is what we actually did on Sunday. It was a SUP that required logistical support because we were putting in at Cave Rock and paddling all the way to Sand Harbor because there is a small section in the middle of that we had not yet paddled, and those are the only two access points in between there!

If you don’t know Tahoe you will just have to trust us on that, there is a gated community that we can’t get into and unless you hike an inflatable SUP down to Skunk Harbor your best bet is to just plan for a long day of paddling to get from one end to the other. It took us about 4.5 hours!

As you can imagine, early morning in early May is not the warmest time to be on the water, but because it was flat water conditions we could both stay dry and the sun didn’t take too long to hit us once we got to around Logan Shoals.

Basically from Cave Rock to Logan Shoals we just paddled a straight line, not heading into Glenbrook Bay at all. We have paddled the entire Glenbrook Bay one time last fall, and while it’s beautiful with a sandy bottom, there was no point so we stayed deep, and I stayed bored and even laid down, which is something I rarely do on the SUP! 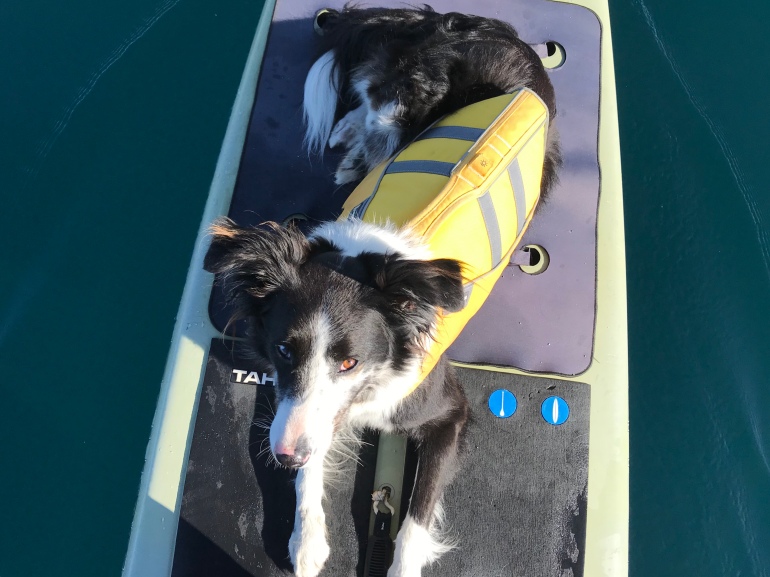 Before too long we were heading into the uncharted territory we had never SUPed before so I was excited about that! For a long, long stretch there was nowhere that we could really easily pull over and get off the board. It’s an older board and momma is afraid of cracking it on a rock and the entire shoreline from Glenbrook to Skunk Harbor was made of big boulders.

Don’t get me wrong, it was BEAUTIFUL, but we usually find a place to stop and stretch our legs just a bit on our SUPs, and that was just not possible for a long time on this paddle. When we finally pulled into Skunk Harbor a man fishing just outside the cove from the shore caught a fish as we were going by, it was pretty fun to see!

We had been hoping to meet daddy and Lolo here at Skunk Harbor, because after they dropped us off at Cave Rock their plan was to hike down and play there. When we arrived momma tried to call daddy but he said that Lolo was limping so they were back at camp. (It turned out that Lolo had a foxtail in his toe, an issue we are almost now clear of thank goodness!)

So after a short break at Skunk Harbor where a ding dong of a dog that wouldn’t fetch but made her mom go out in the water to get her toy every single time…well I guess maybe the mom was a ding dong for throwing it and fetching it herself every time 😂 we started to make our way by some more national forest land, and then some privately owned land with cabins on the shore.

We said hello to a friendly man on his back deck, but stayed out by the boulders since that’s what momma finds to be most fascinating about Lake Tahoe. It was kind of interesting though in this area because some of the boulders out in the lake had a “No Trespassing sign” and we wondered who in the heck owned boulders that are IN the lake? 🤔

Eventually we turned a corner and started recognizing all of the long, sandy beaches that are part of the national forest land on the east shore and knew we were back in familiar territory, because we have paddled down to the end of them before out of Sand Harbor. So while we had finished the section we needed to get done for our link-up, we still had a bit of a ways to go! It really was a big sigh of relief for momma though, because now she KNEW where she was and how much further it was going to be! 😅 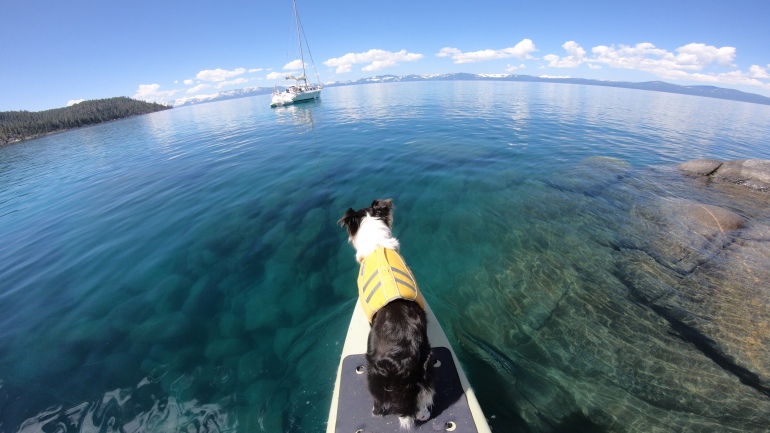 Of course no trip along the east shore is complete without a stop in Secret Harbor. The water level is so high this year that part of the beach isn’t even accessible without swimming out in the water to get to it! But we didn’t really stop to take pictures because it always feels awkward with the nudists there 😬 we’d be so embarrassed if they actually thought we were taking pictures of them which trust me, we are NOT! 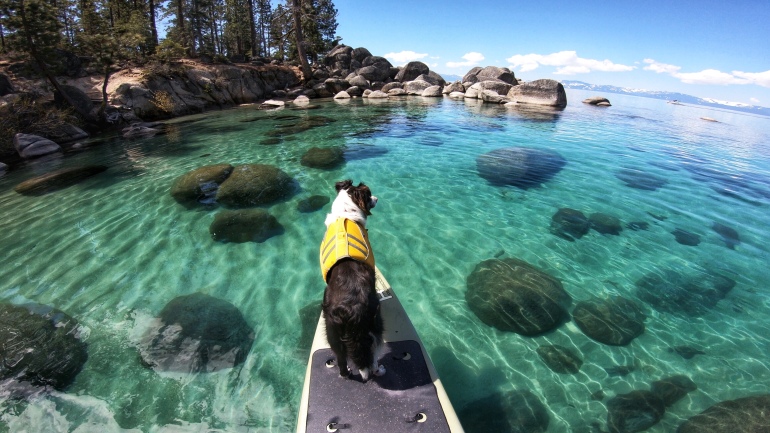 We paddled on to Chimney Beach where we made a quick stop for me to potty and give daddy a head’s up on our estimated arrival time up in Sand Harbor. The beach was full of people out enjoying a summer-like day!

We slowed down on our way up the coast to take some pics by Bonsai Rock because the water is so high, you can go over rocks that you wouldn’t have otherwise been able to go over right now!

We were both getting pretty tired and were ready to finish this SUP and as we pulled around the corner to the boat launch at Sand Harbor we could see daddy there with the car. The folks working there were very gracious about letting him pull up even with the lot full to pick us up. Thank you to them! We would have never made it all the way back to Cave Rock!!

It was a great ending to a tricky logistical piece of our Tour de Tahoe and we are happy to be done with it! Although momma really thinks the east shore is by far the prettiest of anywhere on Lake Tahoe, so she always is overjoyed to paddle over there! I, on the other hand, am not 🤪 (JK)!!! 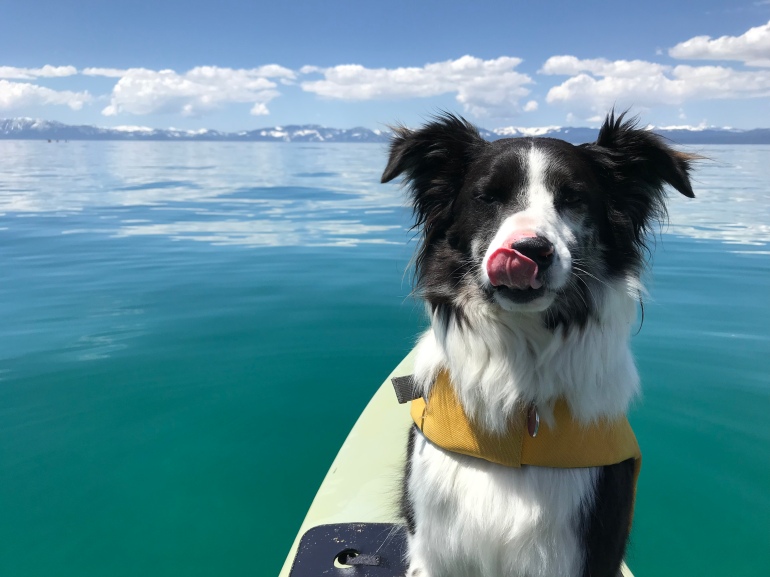