Greetings & salutations! Looks like it’s been a while since we sat down at the computer, but I’m hoping momma is willing to buckle down and post some updates over the next few days about soooo many super fun trips we have done this past fall, even with my lame foot! 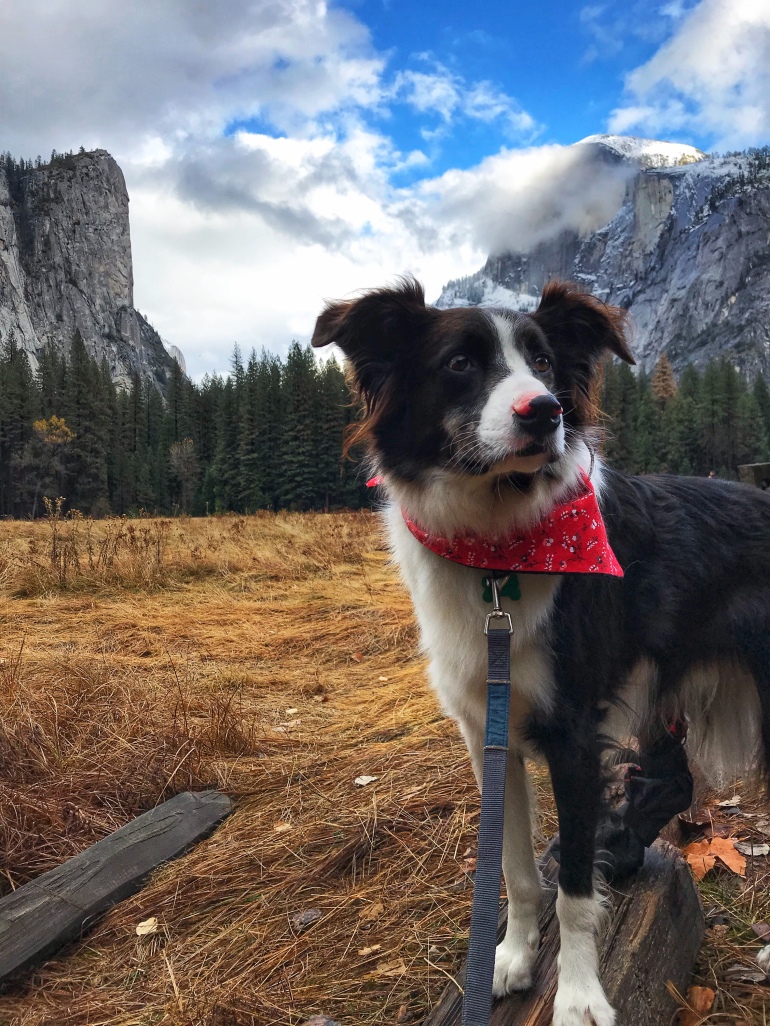 Let’s start with the most recent, which was Thanksgiving. I had my last operation just a few days after momma, Lolo and I got home from our first trip to Yosemite in late October. We had an appointment to see a dermatologist at UC Davis because my toe still won’t close up (!) but when we got into see them they sent us over to the soft tissue surgeons there who immediately said we need to do another operation. 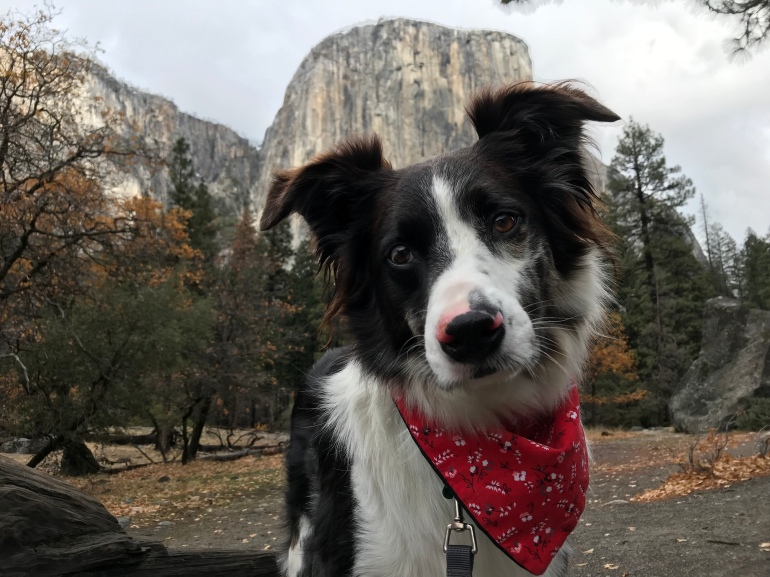 I had the operation on Halloween and it was the third just this year on that same stupid toe. Momma finally decided to buckle down and really keep me off my feet for this recovery which the surgeons had a slightly different plan for, so she bought a Burley Tail Wagon buggy for me to ride in. It also attaches to the back of her Fatbike Betty so I can go on rides with her across town now, too! I’ll be happy to be able to walk on my own again, but I’ve been extremely tolerant and good about using my buggy to ride around in. 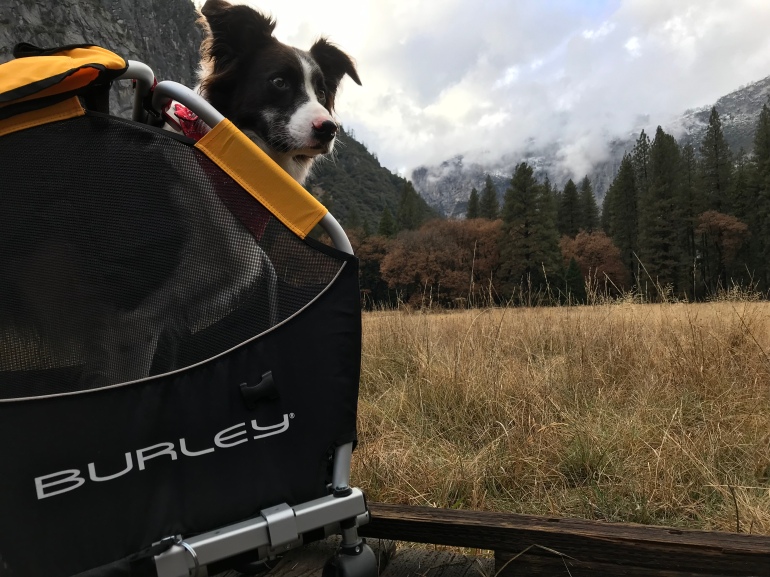 The buggy largely means we are stuck to paved paths for outside time since it’s not totally made for really bumpy off-road adventures. The perfect place to spend a long weekend in these types of conditions is Yosemite! The only places dogs are allowed in Yosemite are developed areas and paved trails. Momma got the idea in her head but had to stalk the recreation.gov website to wait for someone else to cancel a Thanksgiving reservation since it was a bit last minute, which eventually happened so we were all set to get outside, take in the awesomeness of the Yosemite Valley and do a little camping. 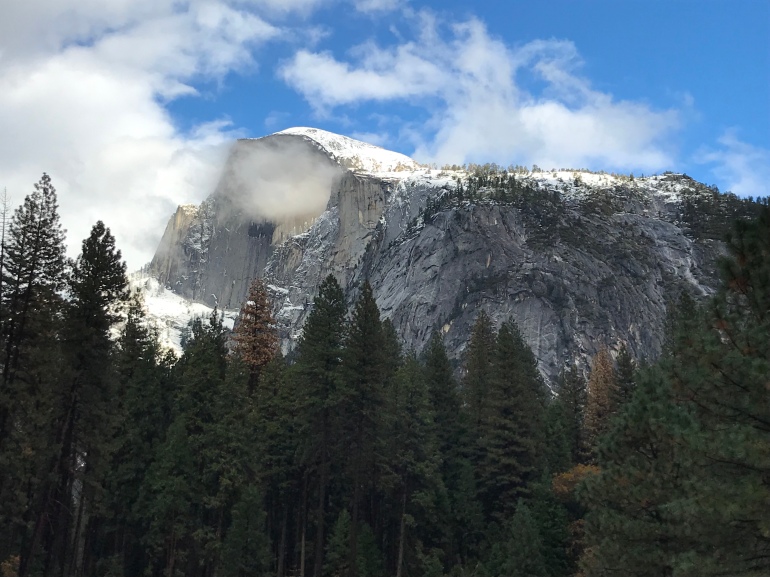 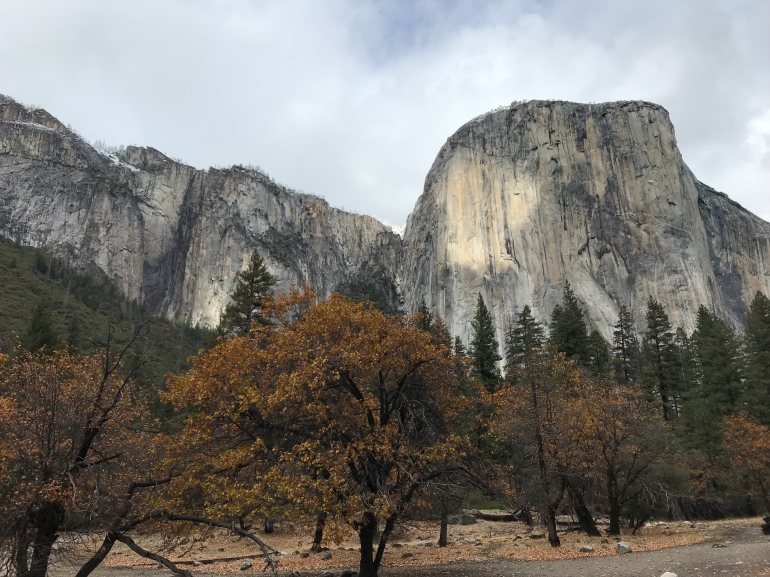 By the time we got the camping reservation Momma had already pre-ordered a Hello Fresh Thanksgiving box, so she and daddy cooked that all up on Wednesday night with the plan to eat all the leftovers for the next few days in the park. The forecast was also looking a little iffy with a lot of precipitation finally moving into Northern California for the winter rains – but with the chance of snow we weren’t really sure what we were going to get while out camping.

Thursday morning we headed out and went the “long” way around, since we didn’t know if there would be snow up in the pass off Hwy 120. The “long” way is only about 20 minutes longer, and still a pretty way to enter the valley. Lots of rain and some snow had fallen on Wednesday night and Thursday morning, but we really lucked out and had a pretty dry afternoon and evening to explore the valley floor. 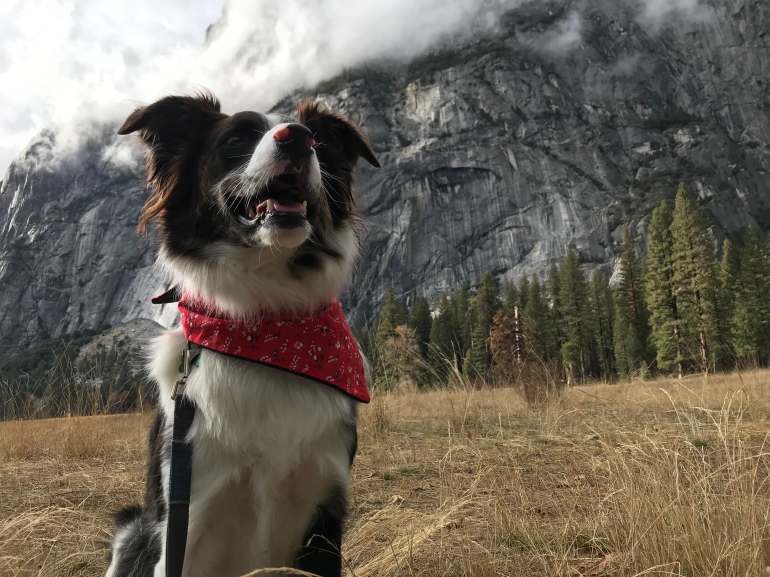 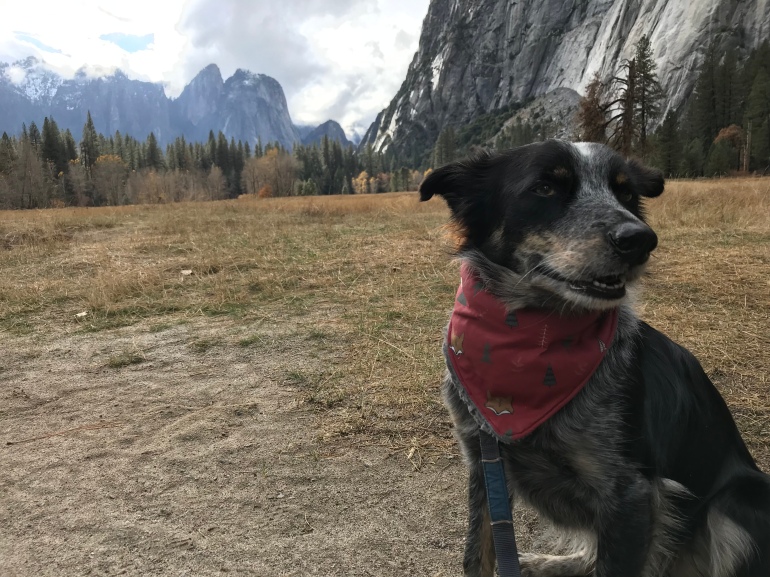 We started off stopping for pictures down by the El Cap meadow and then the swinging bridge before we got to camp to unpack. My buggy was flattened and in the back underneath a bunch of stuff so I am happy in the pictures from before I got put into it since I was having so much fun hobbling along and sniffing all the critters that have no fear of dogs AT ALL. 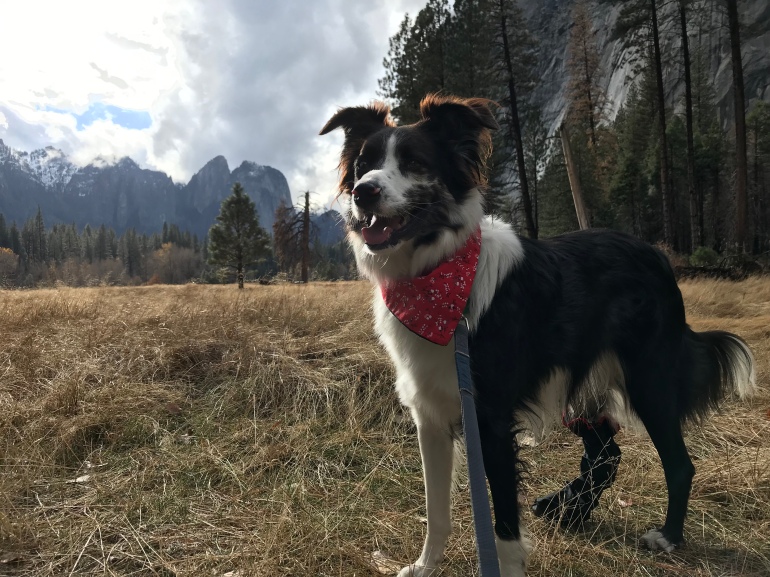 Once we got to camp I had to get in the buggy to go out walking to Yosemite Falls. We took a path on the other side of the valley than what we had done with Momma back in October, and it allowed for some really great views of Half Dome (which you just don’t get on the other side!). So of course we had to take a million pictures. Which isn’t AS bad as I make it sound since momma is generous with giving cookies to me after she takes them. 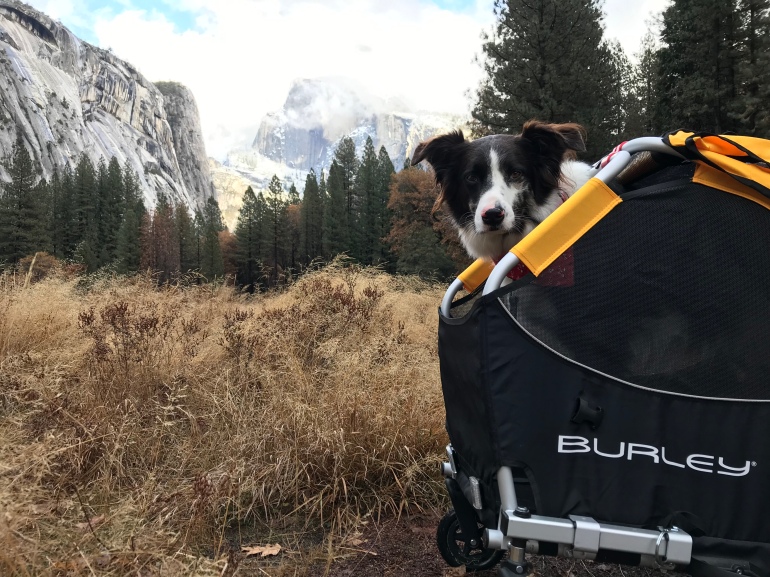 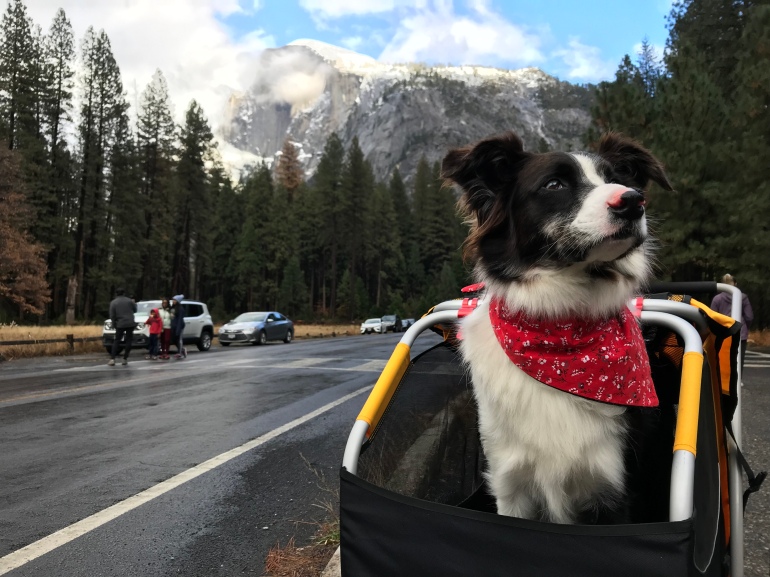 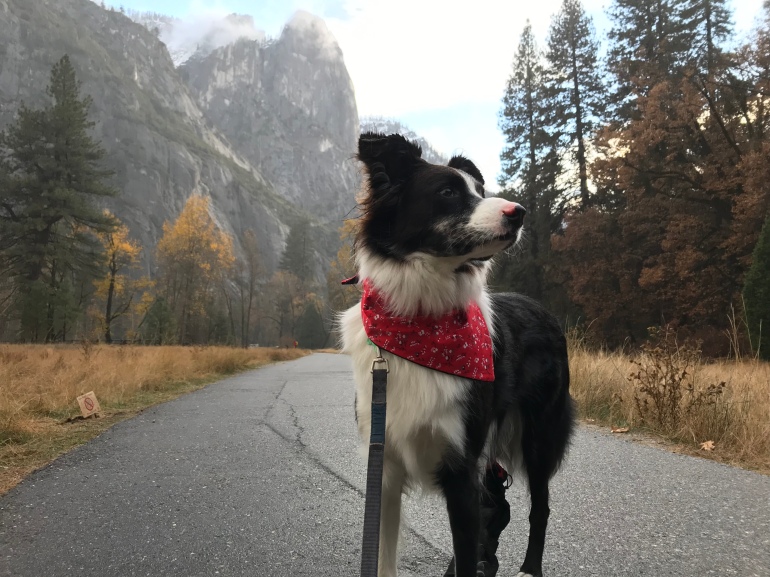 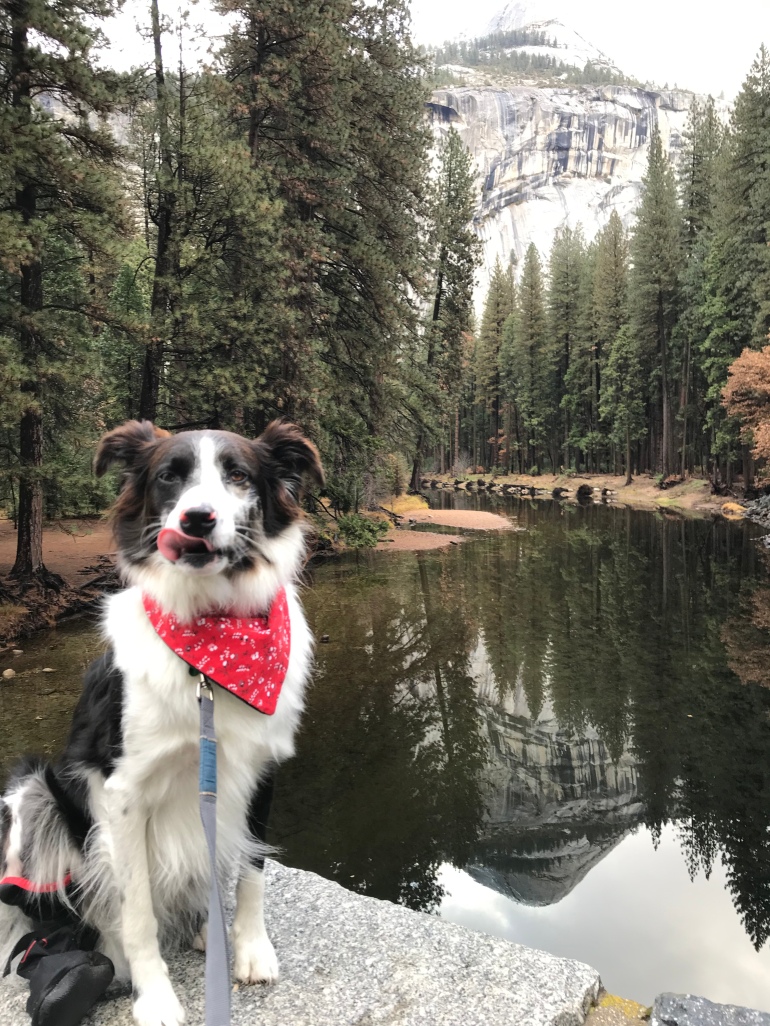 We then went out into the Carlon Meadow for a few pictures before turning around and heading back to camp. By 5 p.m. it’s pretty dark in the valley so Lolo and I got an early dinner and got into the car to sleep. I really like to sleep in the car while we are camping (instead of the tent) so I was really excited that with the forecast for rain overnight (and the evidence in our campsite of lots of standing water and runoff) that Daddy said we were going to just sleep in the back of the Subaru. 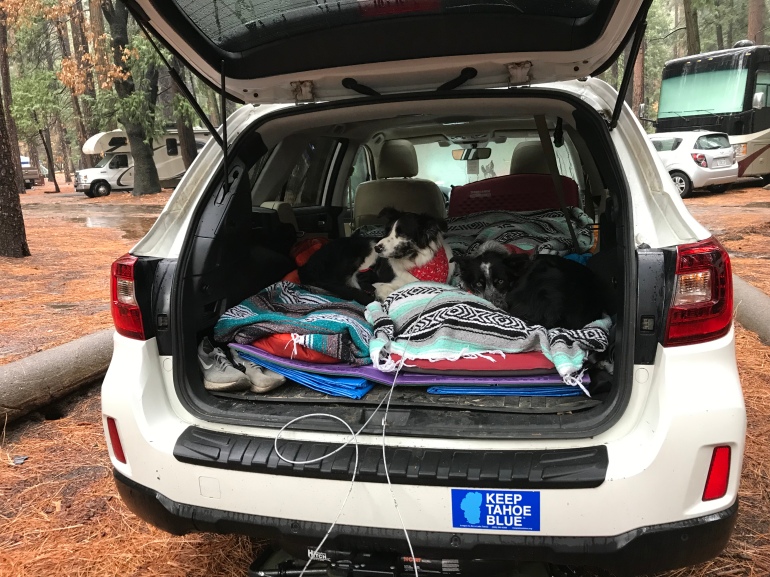 Almost all of the campground was in bed by 7:30 p.m. but momma and daddy stayed up later drinking wine and enjoying the fire since they knew it was the last time to be dry outside for the next 24 hours.

We had a steady rain overnight but slept comfortably in the Subaru. In the morning we ate breakfast before heading out from camp to walk up to Mirror Lake. All day we were in a steady rain, but there were a decent amount of people like us just out to see the sites no matter what! 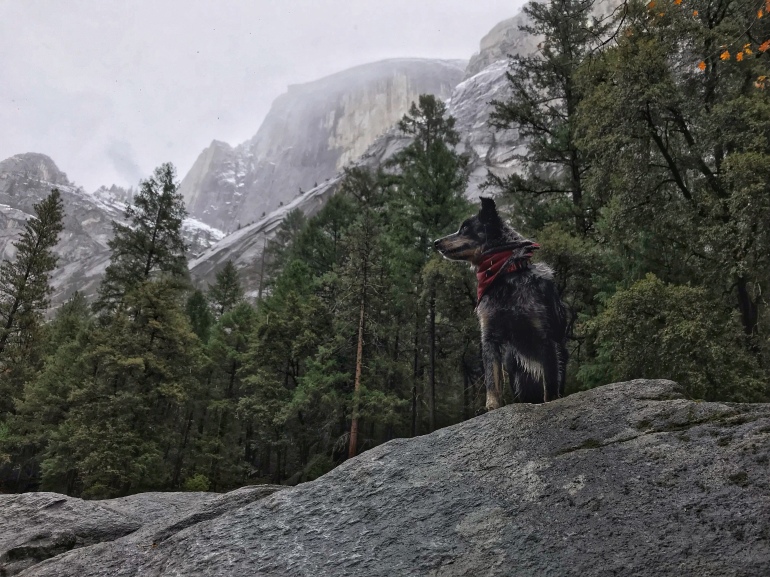 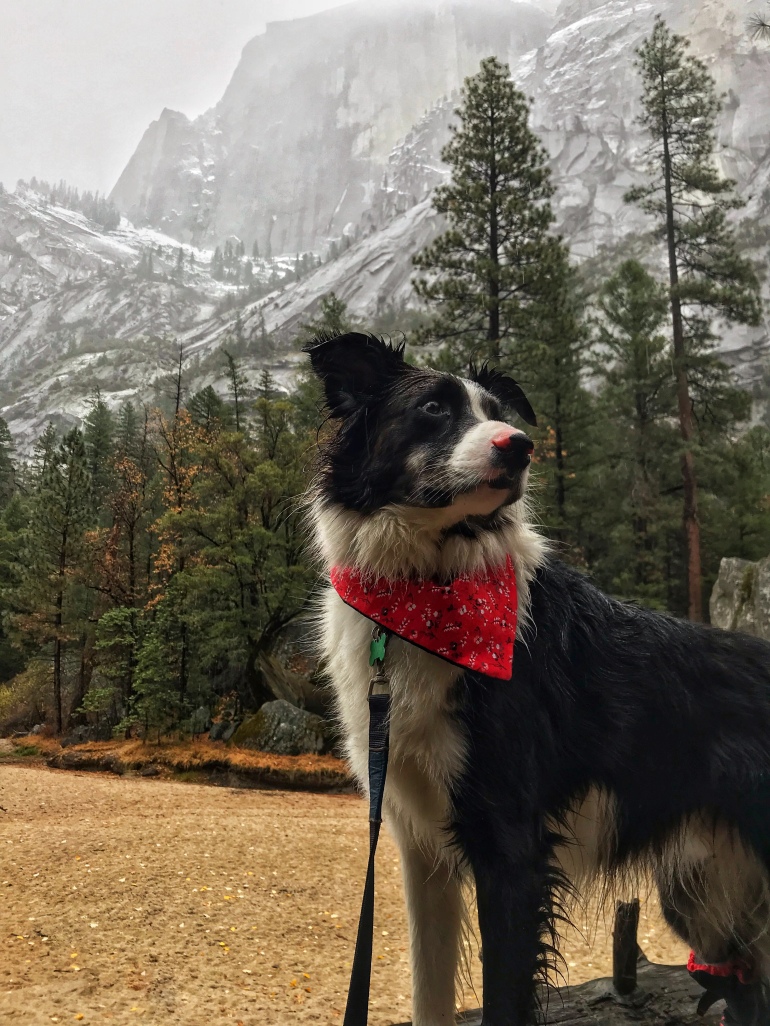 Being confined to the buggy can be tough because I don’t get the benefit of sniffing everything like Lolo does, which can be a little frustrating for me. Momma tries to give me lots of breaks but it’s not the same no matter what. After Mirror Lake (which of course was dry, as it is at this time of year but still has amazing views of Half Dome) we walked on a different bike path back to the Yosemite Falls. There were so many fun bridges we got to cross and see the sites from, I was glad we took a different way than just the main road! 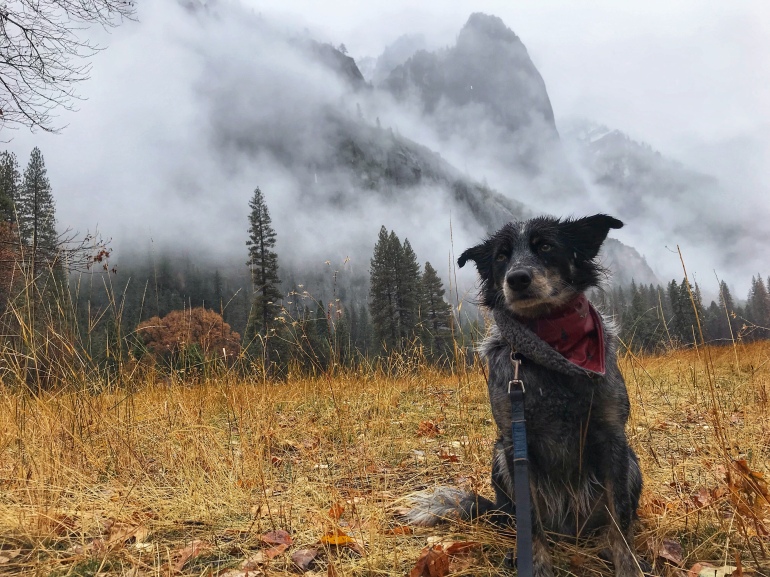 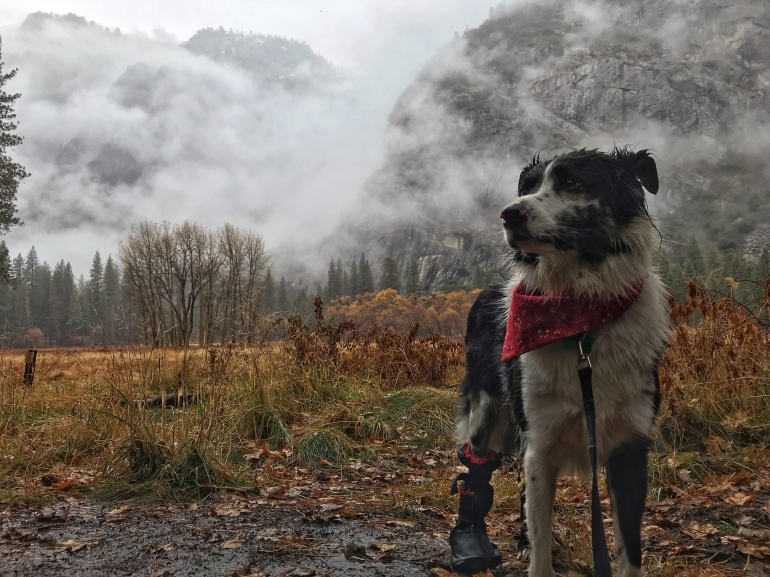 By the time we got back to the falls and the meadow we were all SUPER soaked. I mean all the way through, and no-one was really having a lot of fun. It was a project to just try to take pictures because it was raining so hard! The forecast was for a lot more rain – another 24 hours of it so momma and daddy decided we would go pack up camp and not stay another night, since everything was already so incredibly wet. 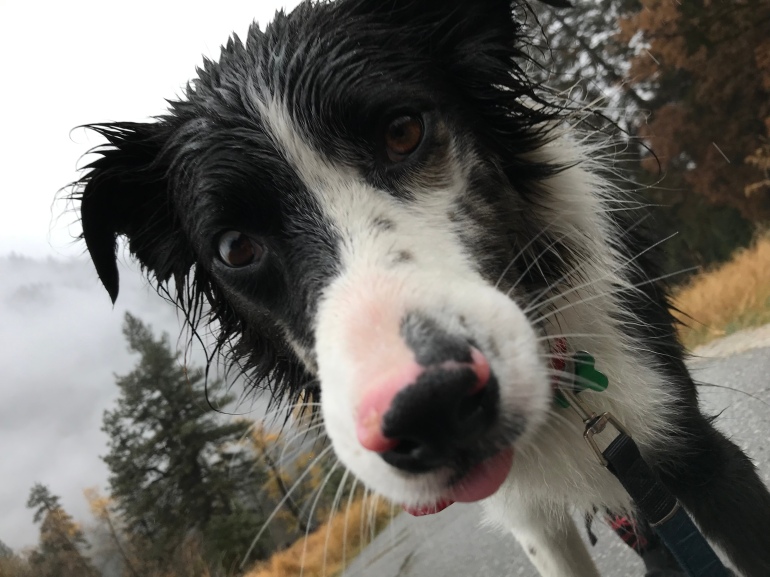 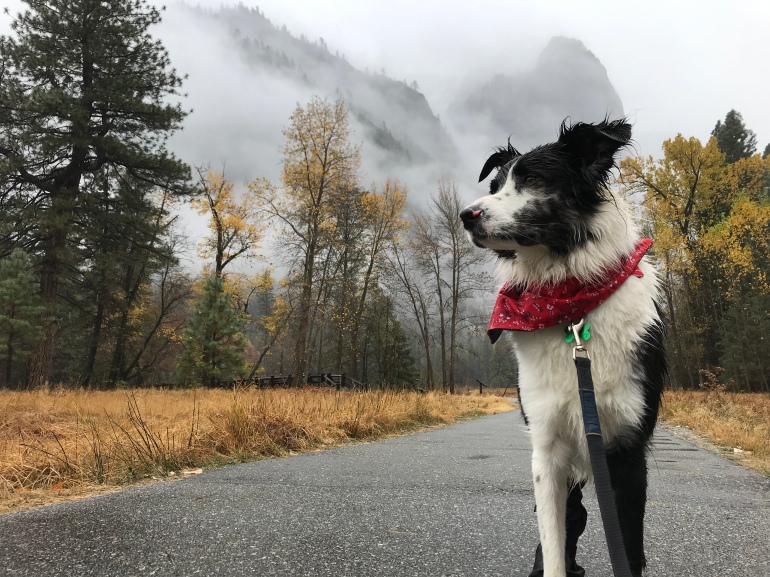 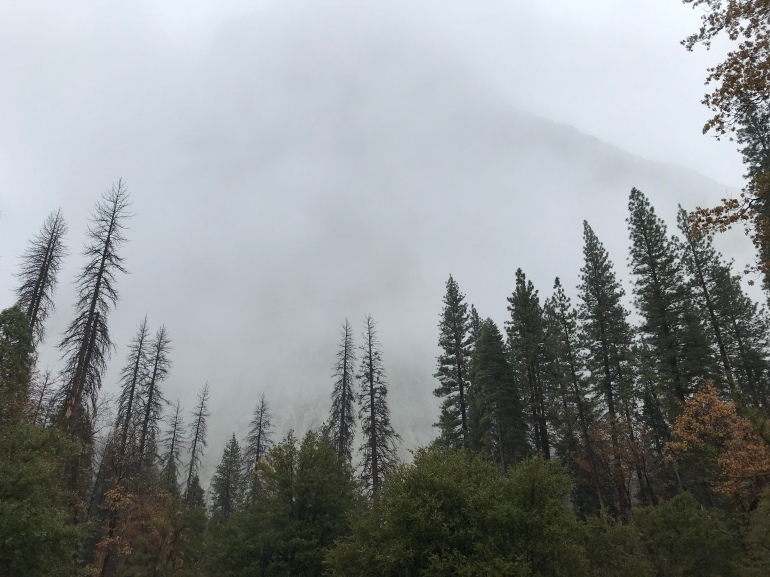 We packed up camp and Lolo and I were happy to be out of the rain and in the car while we got lunch and stopped at a few more sites for pictures, including Tunnel View which was entirely a blank slate! 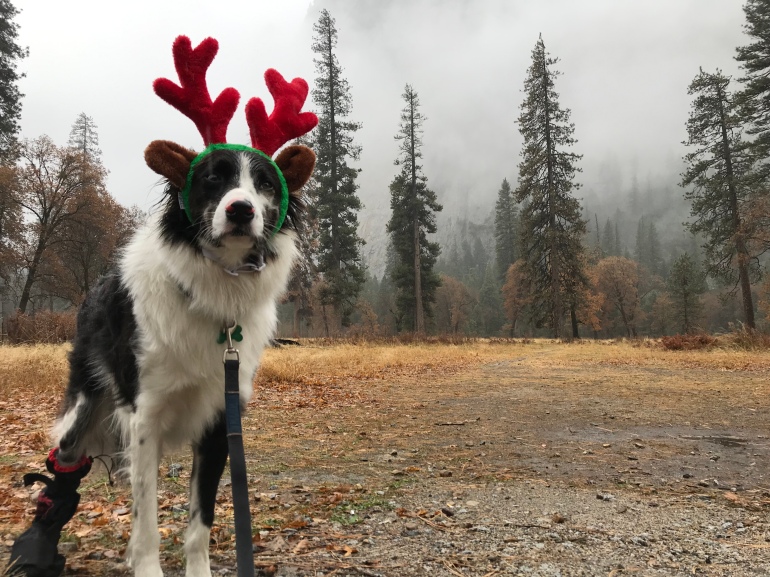 By late afternoon we left the valley and as we were driving home momma saw the forecast in Tahoe for Sunday was looking really promising. Saturday we dried everything out and got lots of Christmas decorations up so that Sunday morning we could get on the road and go to Tahoe. We left after a nice walk (well, buggy ride for me) and visit at the park with our friends.

The SUP was on the car so I knew I was going paddling with momma, and daddy dropped us off at Sand Harbor so that he could take Lolo up to hike in the snow at Mount Rose. We had an amazing 4 hour paddle and got to enjoy such a pretty day that I am SO HAPPY we made the decision to leave Yosemite and that rain early. We are a little spoiled because we live really close to Yosemite and it was the perfect opportunity to get ME outside since it was super buggy friendly, but nothing beats a day on a calm lake Tahoe for momma (or me!). 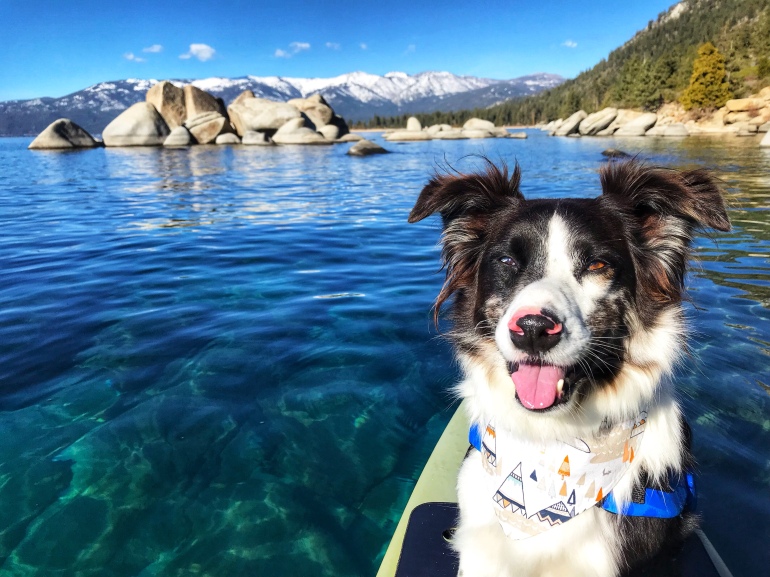 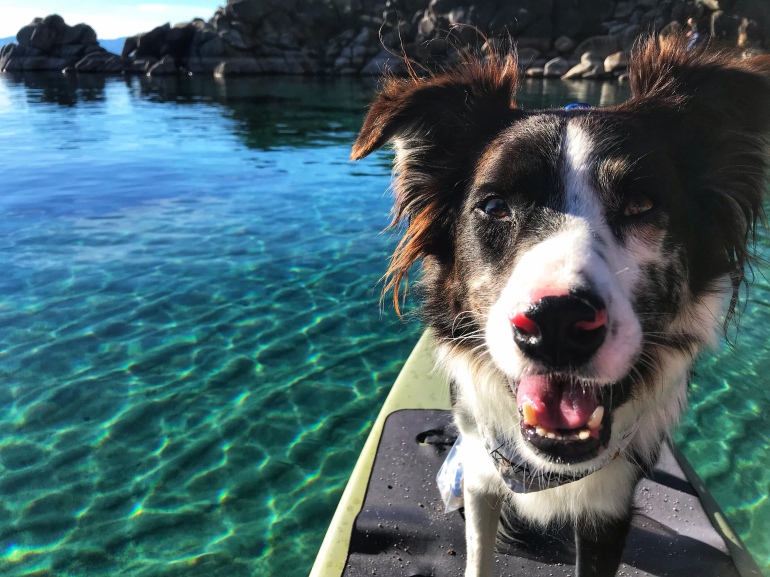 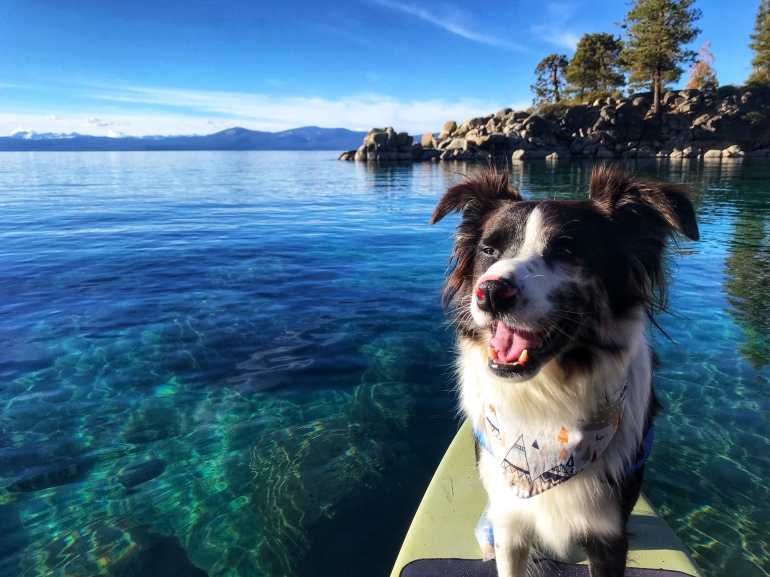 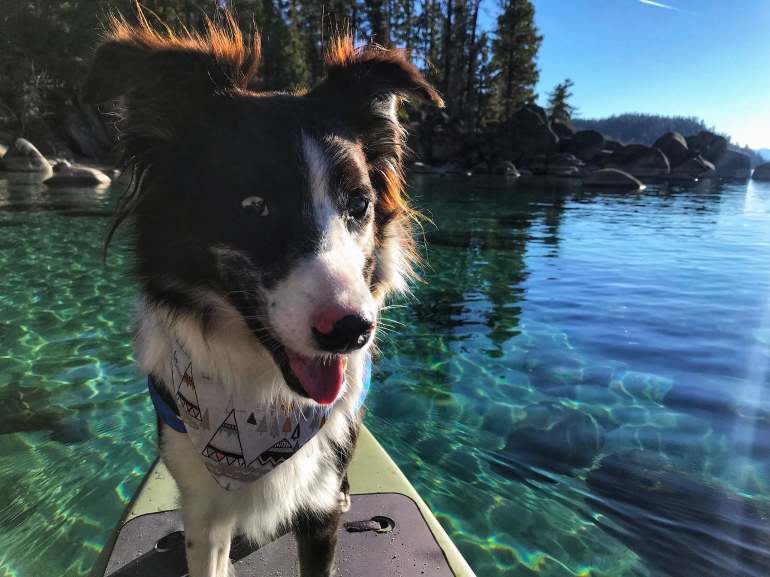 Of course, I would have loved to be running in the snow with Lolo, but I have to keep my bandage DRY and momma just doesn’t think I can do that with any type of cover in the snow. Not to mention that I’m not actually supposed to be running around at all anyways! Overall, we were happy and pleased with our productive three days in the mountains on this 4-day weekend even with all my physical restrictions! Not to mention proud that my foot bandage stayed perfectly dry and in place the entire time!