We started traveling down earlier this spring to a magical place on the California coast called Big Sur.

I will write a separate post that shows some of the OTHER amazing things we have gone to in Big Sur since we have gone so many times, but since it is fresh in my head and the pictures are burning a hole in momma’s phone (and her new GoPRO!) we wanted to share.

Since we are coming from the north, we decided to take the scenic 17-mile drive en route to Big Sur so we could get out of the van and stretch our legs a bit. We always like to lunch at Spanish Bay, which has beautiful white sand beach and take the trails south from there. Of course there are some golf course holes you have to go around (like this one)!

The wildflowers were still really going off – maybe they do all year round? We have no idea we just love seeing all the colors and variations in what is blooming every time we go.

I still have three staples in my foot, so I didn’t want to do a ton of walking. My Muzzy was so happy to take breaks with me while momma and Lolo explored just a bit more.

Lolo is obsessed with sticks at the beach.

He would dive off into the water here if you threw it!

After we wrapped up at 17-mile drive, we went past Carmel and into the start of the Big Sur coastline. We had camp reservations that were ocean front at Kirk Creek Campground, a lucky break momma scored at the very last minute.

One of momma’s favorite places to stop is McWay falls because, well, it’s BEAUTIFUL. It’s not a dog-friendly area on the trail to the overlook within the state park, but you can totally get the gist of what it looks like from the pull-offs and overlooks right on the road. 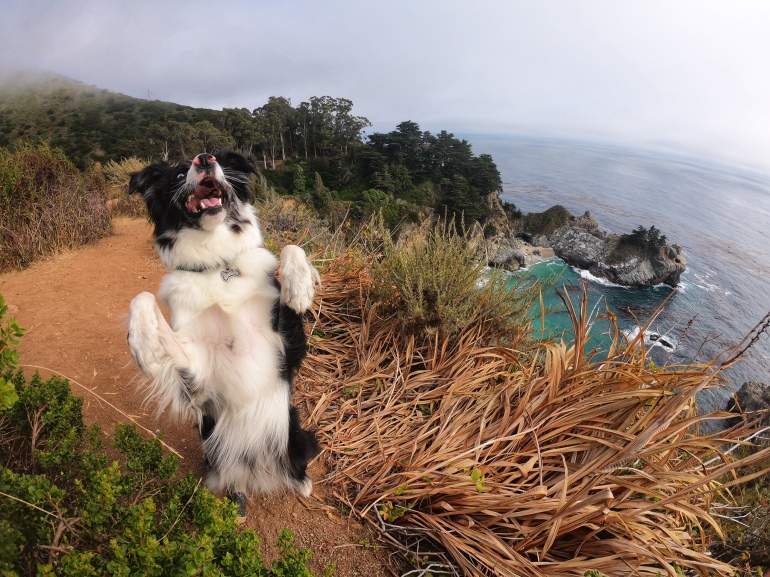 Do you see the waterfall down there? It’s like a movie scene!

How epic would it be to get down to that beach?!?! 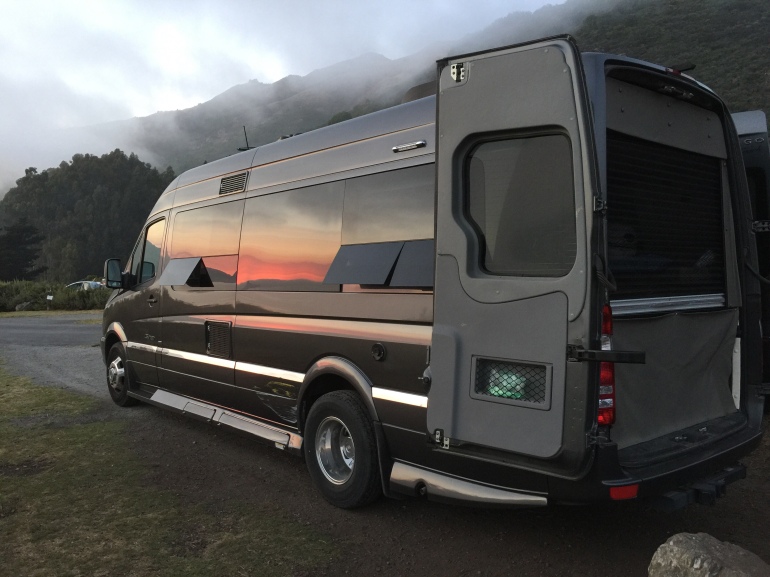 After McWay falls we went right up to our camp at Kirk Creek. We arrived just after 6 p.m. so it was too late to get any firewood for that night. We decided to explore the area by taking the trail down to the “beach”. I say “beach” because it isn’t a sandy beach, but a beautiful rocky one like this!

Kirk Creek is some tasty water! I enjoyed a long drink here. The trail to get down to the beach is really fun, kind of like a fairy tale with these tall flowers and gigantic trees that sew you onto this super narrow path before POOF you pop out to these views! 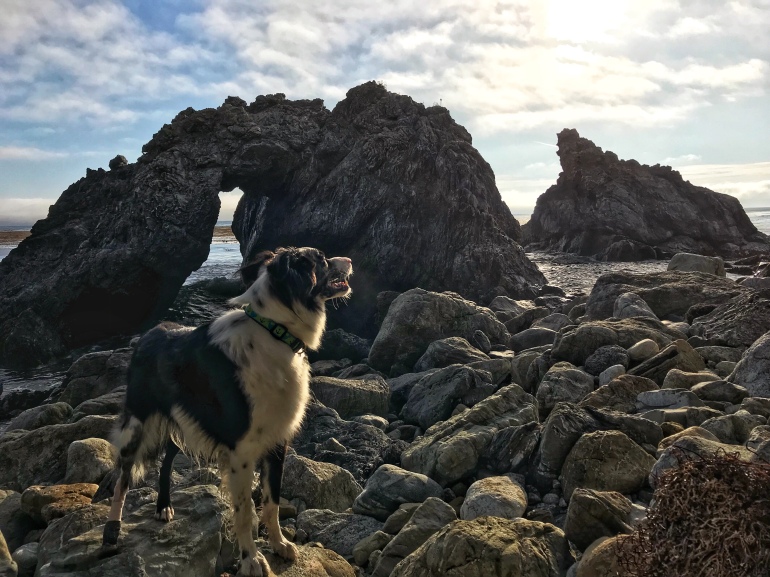 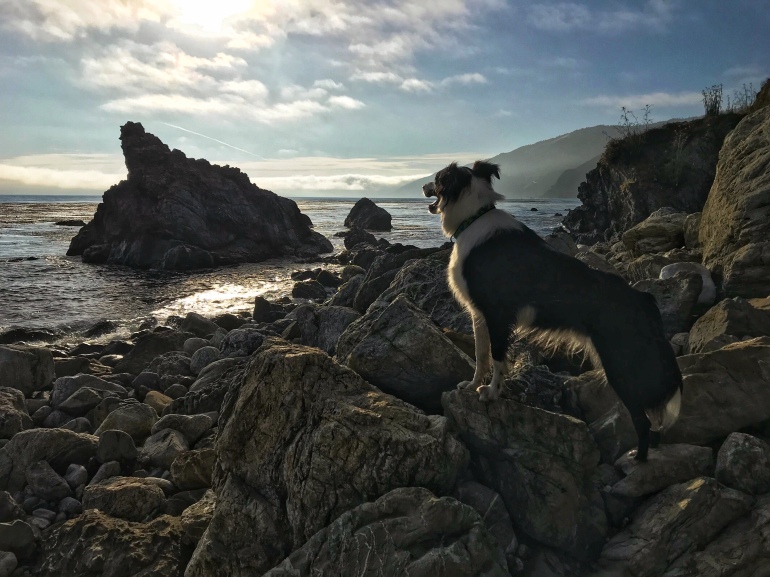 Back at camp we had some dinner and realized there were a dozen bunnies that were lurking around non-stop so we spent all of our spare time staring at them and hunting them from our tie-outs. Of course, Lolo forgot he was on a tie-out and did a backflip with the first bunny he chased. After that, momma made him hang out in his harness the whole trip!

We woke up early the next morning and wanted to stare at the bunnies out the window but momma decided we should go check out the ocean again with Muzzy this time because the fog and conditions were simply amazing – which you can definitely see! 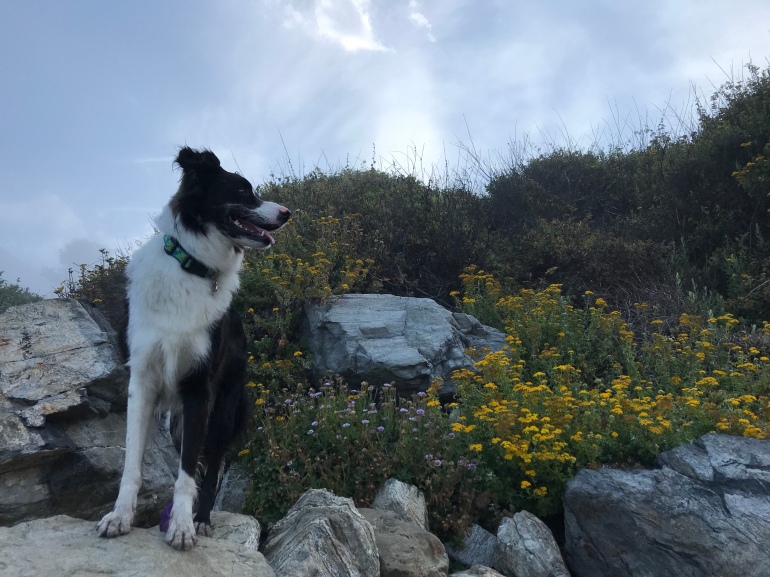 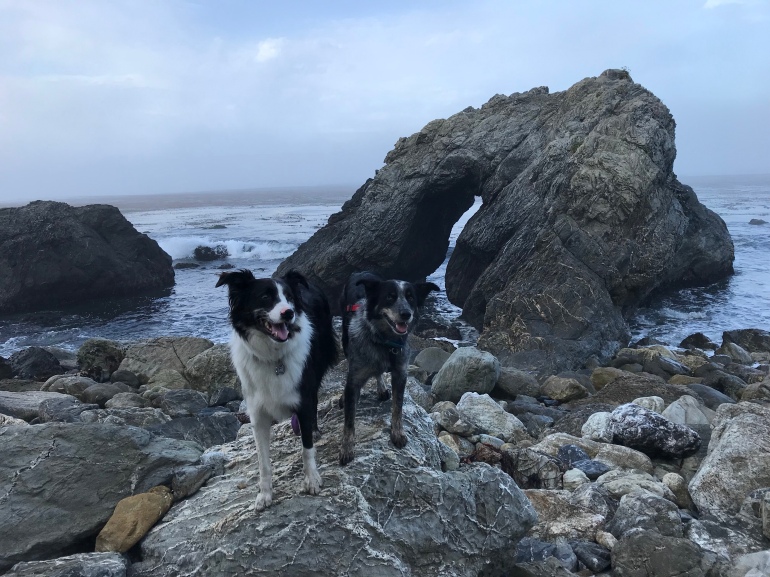 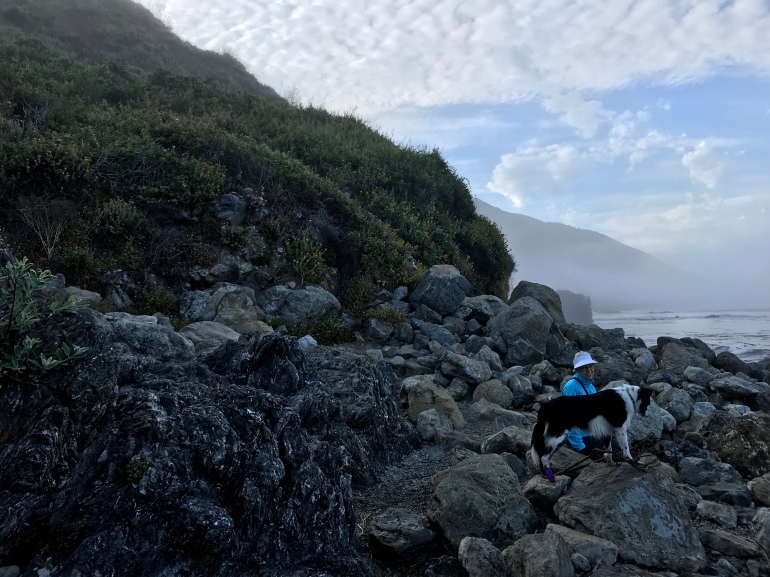 After breakfast we decided to explore to the south. We had only ever been a few miles further south in Big Sur before because Highway 1 was closed for several years after some really bad mud slides. But, it’s now open, which was a surprise to momma. We had just been down in Big Sur less than a month prior and it had not been open then, so she was anxious to see what Big Sur looked like even further to the south.

First, we decided to make a road-side stop in Pacific Valley to explore some of the trails there. It was beautiful and full of traditional coastal paths to everywhere and yet nowhere at the same time. We attempted to get down to the beach but decided we shouldn’t try to make Muzzy break an ankle so early on her trip! 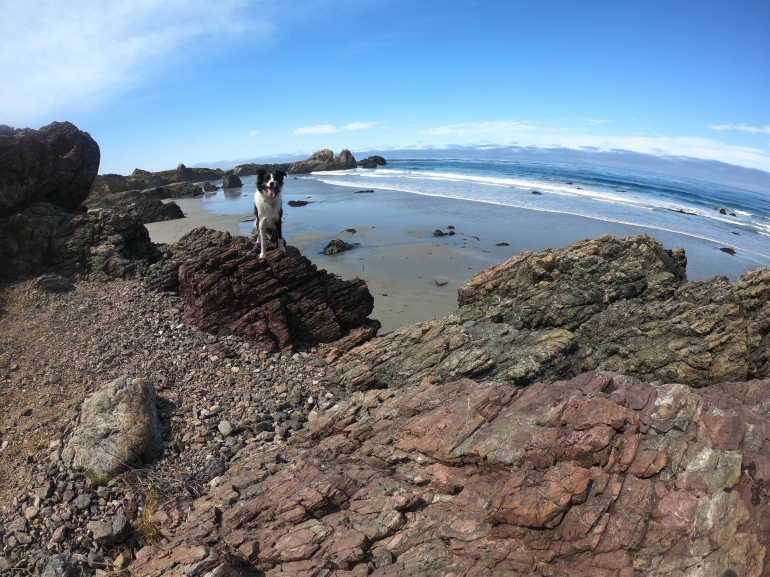 Being that it was the beach and Lolo is a nut for the water, he would just take off and charge straight down to the water’s edge. If you look hard in the next few photos that appear to be just beach scenes, you will see that crazy boy hoping someone will follow him to throw a stick. 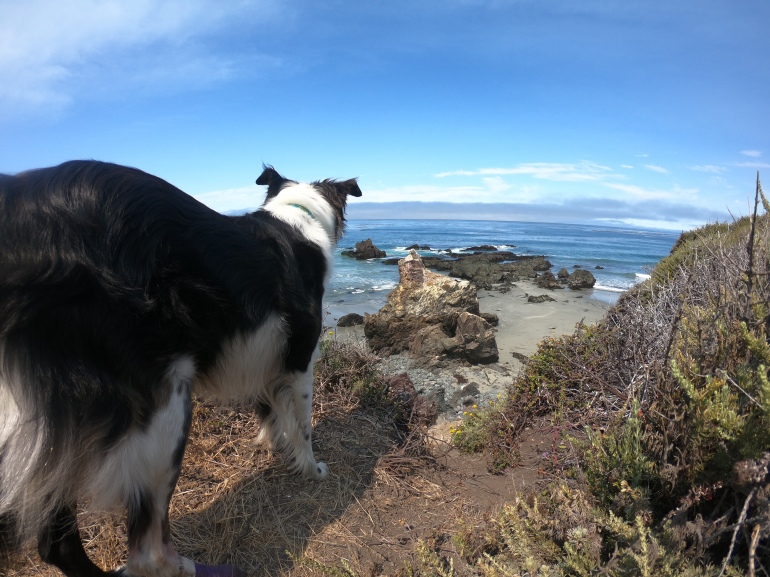 Here I’m thinking about joining him, but momma really did not want me to do that with my bad foot. 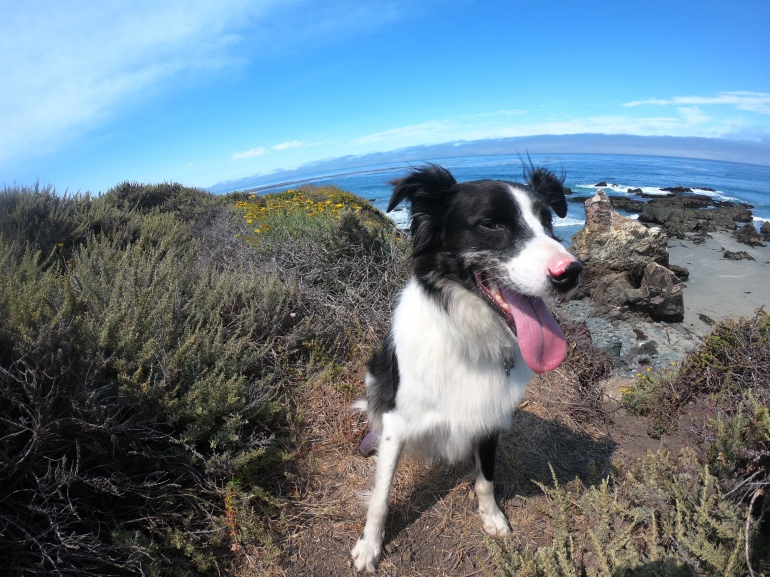 Sniffing out bunnies! But seriously, seriously collecting ticks. A lot of ticks. I mean guys, this coastline is just full of ticks all year round. Every time we come Lolo and I get dozens. And then they crawl on momma at night in bed and she freaks out and gets like NO sleep. Ugh. The only down side to Big Sur she says! So when she realized we were all collecting lots of ticks we moved on and kept driving down the coast. We drove all the way down to Ragged Point when momma decided to turn around because she was getting nauseous with all the curves!

We backtracked to the Salmon Creek trailhead. Since there is no cell service of any sort here we didn’t know what hike to do, so momma picked one that didn’t look as crowded as the waterfall one down the road. Which was probably a big mistake because the one we did was SO HOT. It was beautiful once we got up to the plateau, but man, Lolo and I were just DYING of that hot sun. 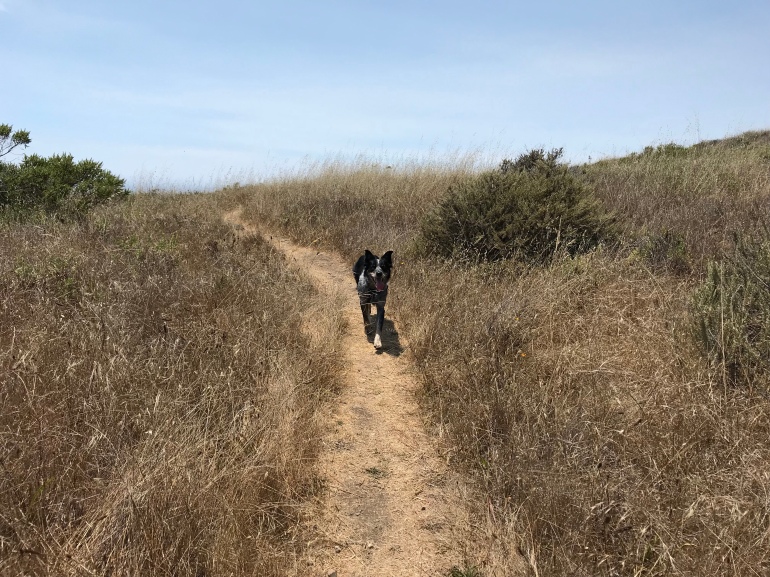 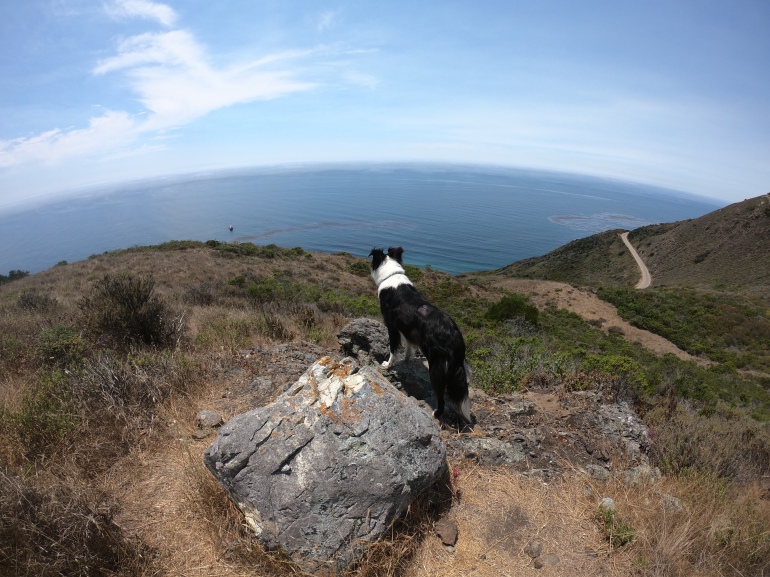 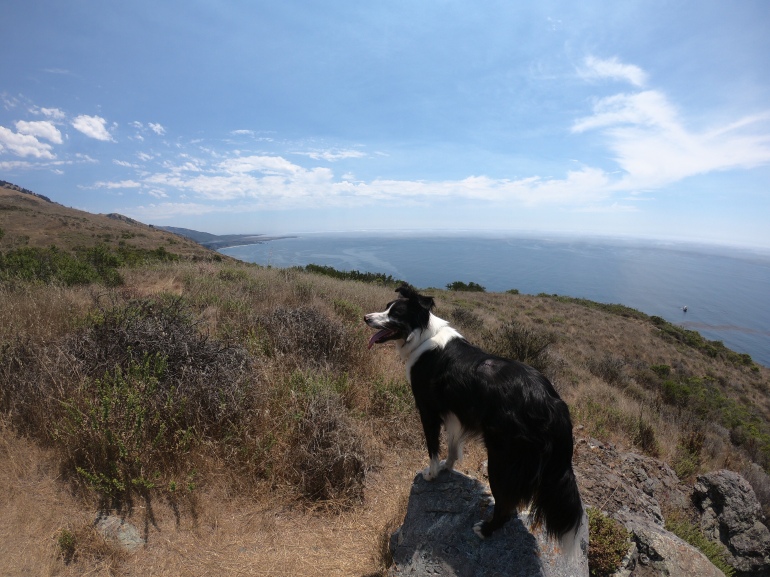 Even though it was hot and dry my foot got super wet so momma had to take off my wrap and let my foot air out and dry before she could put a new wrap on it. This meant I had to ride around in my cone for a bit, because all I wanted to do was lick my stapled up toe.

It wasn’t very late in the day still so momma and Muzzy did some projects around camp while Lolo and I napped and waited for sunset.

The next morning, momma decided to check out the trailhead right across the street from our campground. We just went up the trail – which started in super heavy fog – for about 30 minutes. It was a lovely trail with really cool views of the fog below. And anytime Lolo and I get to roam and sniff off-leash we always have the BEST time. 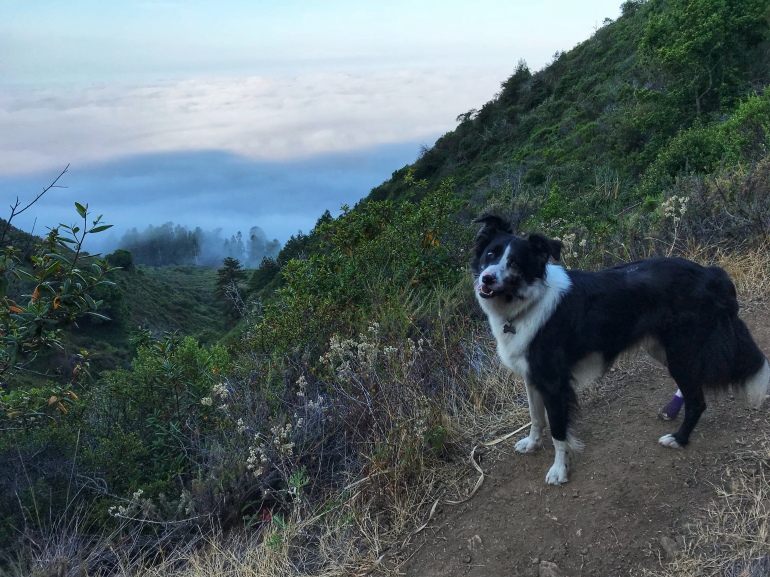 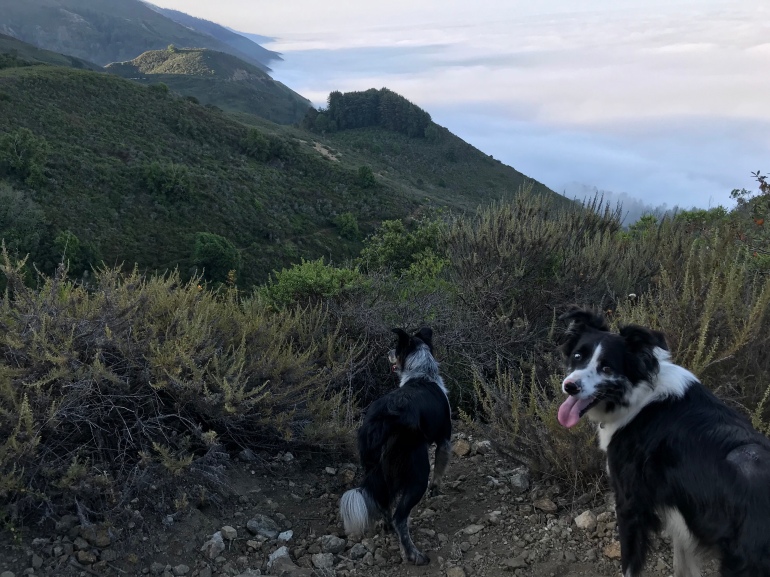 Back at camp we ate our breakfast and packed up to move on for the day.

We went back south about five miles to Sand Dollar beach, which is right across from the Plaskett Creek Campground where we went camping for 3 nights on momma’s birthday. We also had collected a TON of ticks there back in May, so momma was anxious to keep us off the coastal trails and on the beach only!

It was a pretty low tide and we got there mid-morning, so there was ample room to sniff, explore and play! I even did some GoPro video filming here! 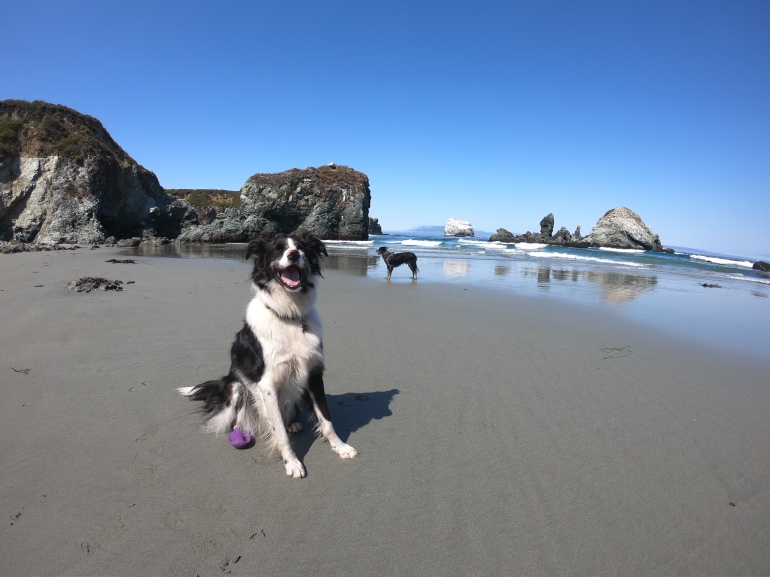 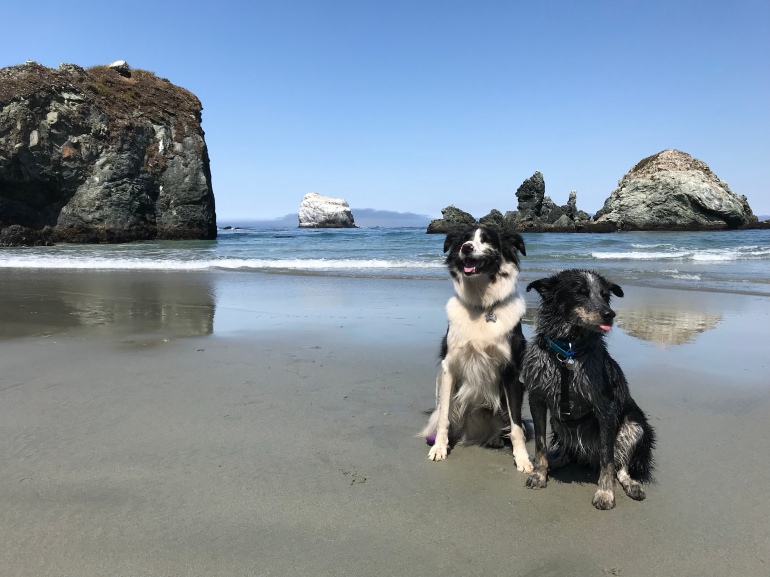 There were quite a few naked people out sunbathing at Sand Dollar beach that day. See my face?!??!

Our camp site for tonight was north of Monterey, because momma didn’t want to drive home in Friday afternoon East Bay traffic. So we made our way back north with a stop at Garapatta State Beach for lunch. It was very cool and foggy here, so different from Sand Dollar beach! 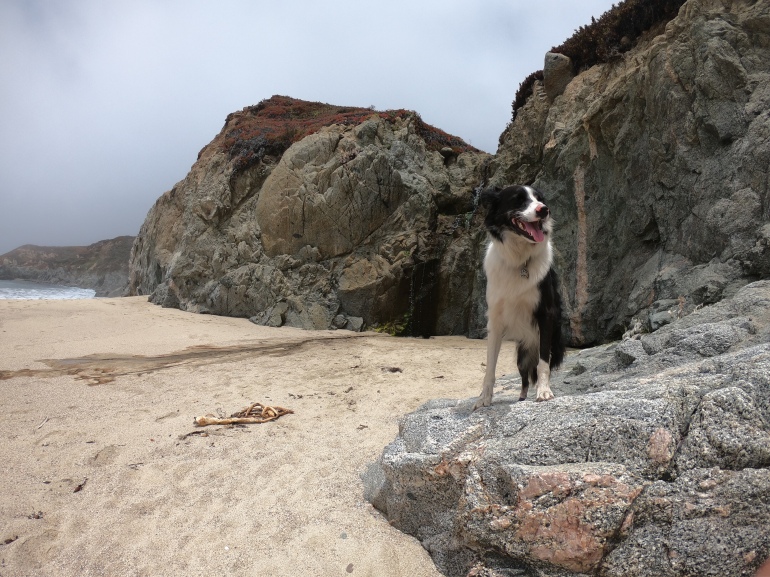 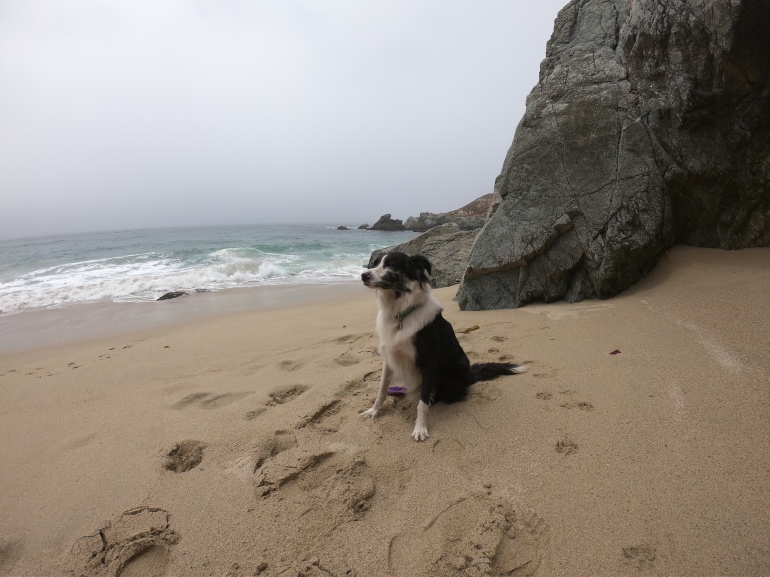 After a bit of exploring, filming, and watching the waves we made our way up to Marina where we were spending the night at an RV park so that momma could dump the tanks and she and Muzzy could take showers.

We had to get up early the next morning so that I could get to my vet appointment! It was fun to see yet another part of the California coast. There were lots of really cool big dunes here covered with beautiful grasses or ground cover (where lots of bunnies also seem to live!). The beach was very uncrowded and sandy and we could walk a long ways – if my stupid toe would have let me!!

I was supposed to get my staples taken out of my toe at that vet appointment on Saturday but they didn’t because they said my foot was a mess! They were very disappointed that momma had taken me on a trip, so she kind of got in big trouble for that. So on Saturday we had to put a new wrap on with strict instructions to keep me quiet and dry for the weekend in hopes the staples would come out today, Monday. But when they tried to take them out today the stupid toe just opened right up, so they put a staple back INTO my toe and put some glue in there too. Fingers crossed this will work because honestly, we are getting SUPER DUPER sick of all this.

We were supposed to take our Muzzy up to Oregon, but since momma got in such big trouble for just a few days in Big Sur we knew we couldn’t go – and I have to go back to the vet on Thursday to hopefully see if we can THEN get this toe out from under wraps. So what will we be up to the next few days? I’m not sure! But hopefully something!!