Momma was keen to see Sedona on our Christmas trip, since we knew it was famous for some reason, and were really not very far from it on our trip to Arizona. So, while we were in Scottsdale visiting my cousins and uncle, momma and daddy decided to take a day trip up to Sedona. It was basically the kind of drive we make to Tahoe, which is to say just shy of 2 hours on the road. So totally day-trip-able since we hadn’t searched for or booked any lodging ahead of time, and it’s like SUPER expensive in this area. 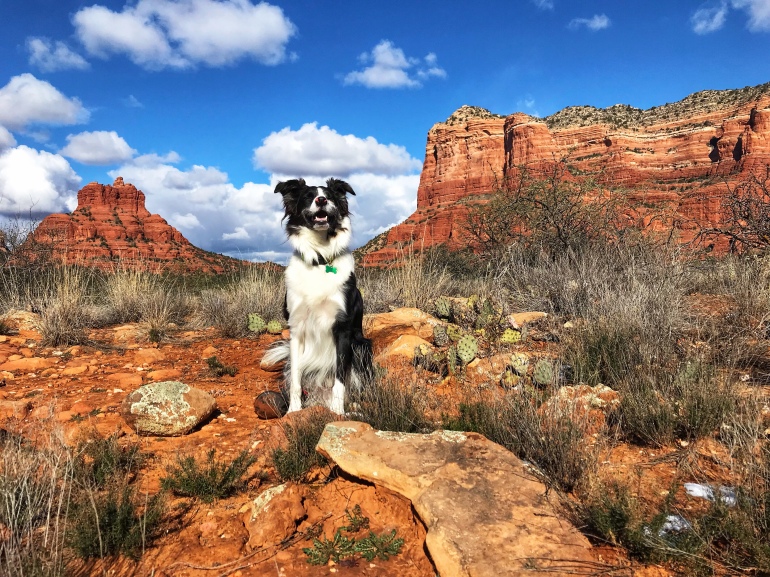 We went to the Bell Rock parking lot and lucked out finding a spot after only one lap through the parking lot. We arrived sometime just after 10, so that is probably the start of the total shit-show hour. From many reviews of trailheads in Sedona, we knew that parking is likely the biggest crux of all, and being so close to Christmas there were PLENTY of people out on vacation, just like us.

We lost most of the people right off the bat from the trailhead because most everyone was heading directly to Bell Rock. We opted to just head in the opposite direction as there were plenty of trails throughout the whole area and with rock formations as distinct as those you see here, it’s near impossible to get lost! 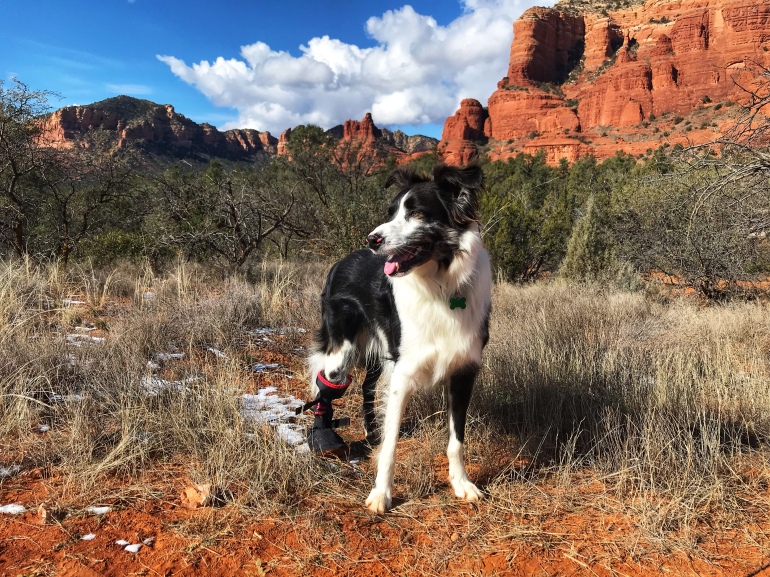 The weather started off really sunny, with the crisp clear blue skies you only get in the west where the air isn’t heavy with pollution.

About an hour into the hike we could see precipitation moving closer to us from the distance and we were just waiting for when it would get to us, dreading being out of the sun! The desert, this whole trip, was surprisingly cold. We already could see a dusting of snow that had happened the night before, but were expecting the precipitation to definitely be rain. See it coming behind us? 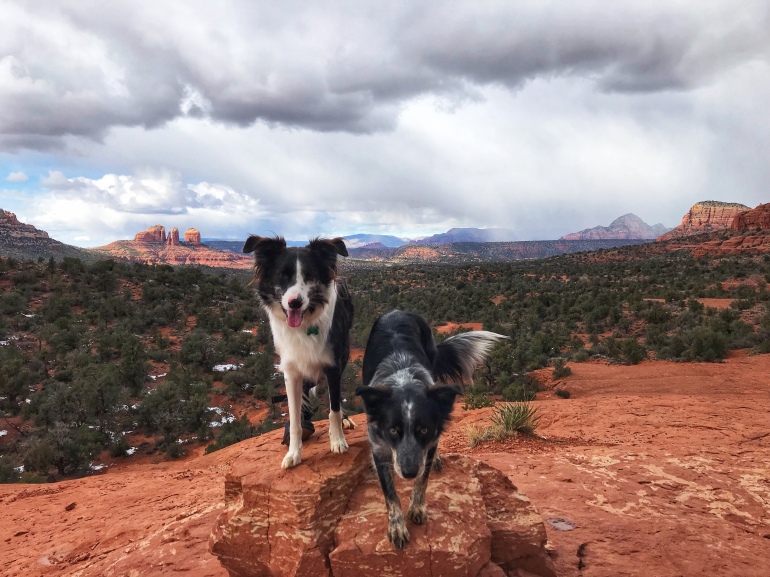 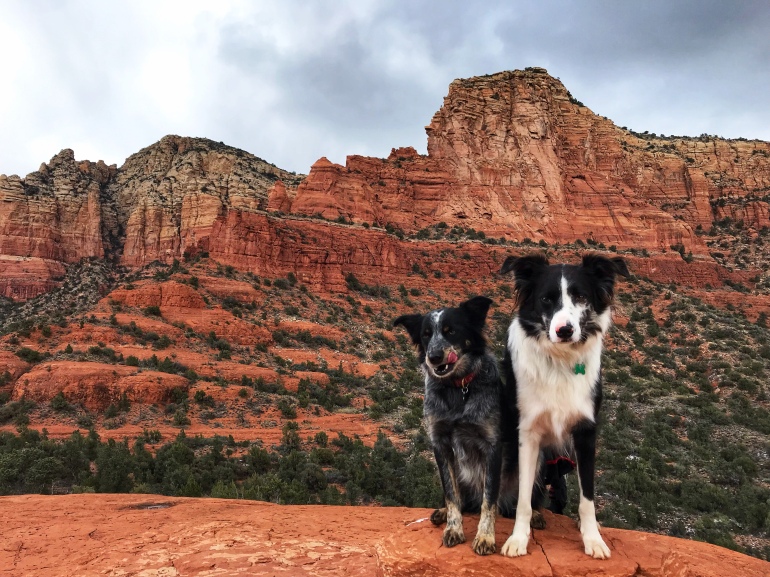 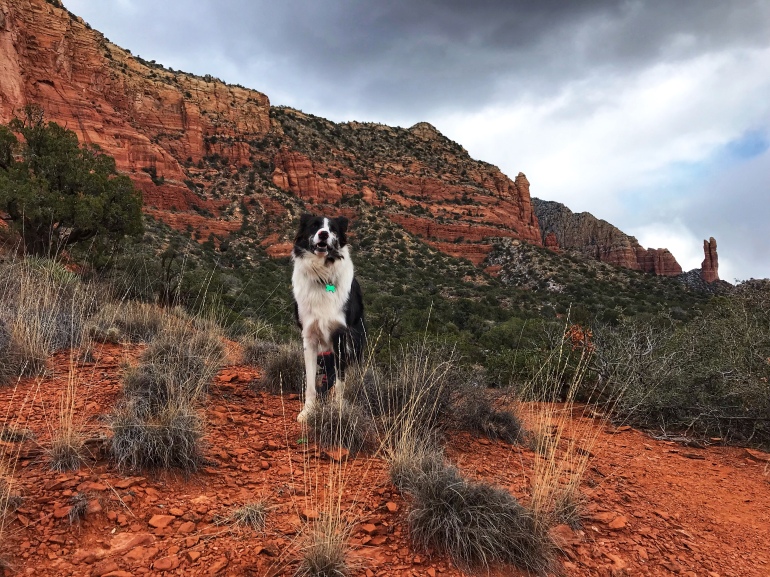 Shortly after we crossed into the Munds Mountain Wilderness it started SNOWING!

It was big, fat flakes of snow. It continued for at least an hour, making us not willing to try to scramble up to the top of Bell Rock because it really did look too slippery, especially for me in my boot which has basically zero traction. 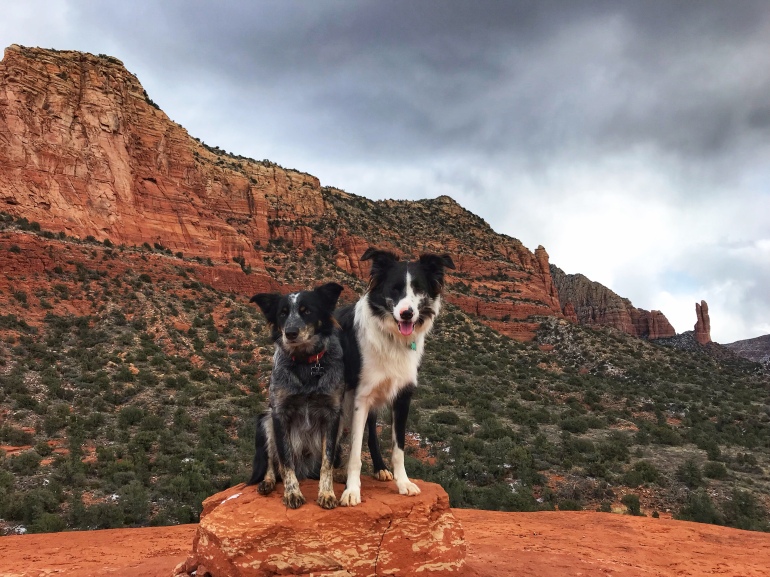 Around the backside we really did most often have the trails to ourselves, with only the occasional passer-by. There were a lot of people not at all deterred by the weather scrambling up on top of Bell Rock, so it must not have been that bad. But lots of people and sketch conditions are not the greatest place for dogs in momma’s opinion.

By the time we were getting back to the parking area the storm was already done blowing through and the blue skies were showing up again. We headed back down to Scottsdale to our Uncle’s house to spend one more night before passing through Sedona again on our way to Flagstaff. 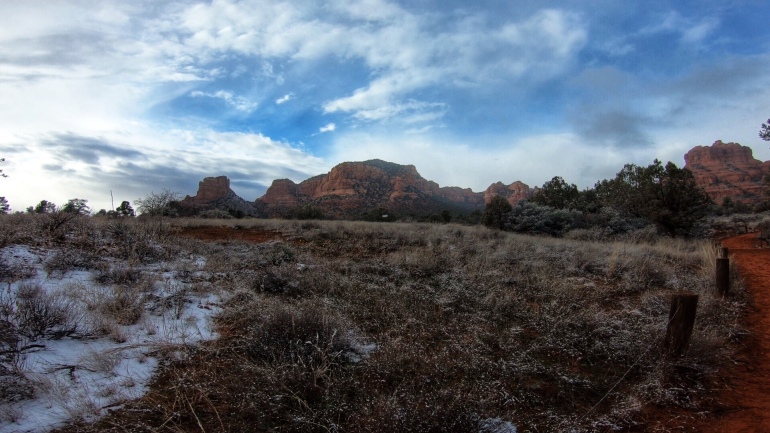 Don’t mind my gimpy hops too much in this video. The toe that had been causing all those problems has since been removed from my foot.

Our second day in Sedona we went up to Brins Mesa for about 8 miles of hiking. We were happy to find a nice, big parking lot up there! 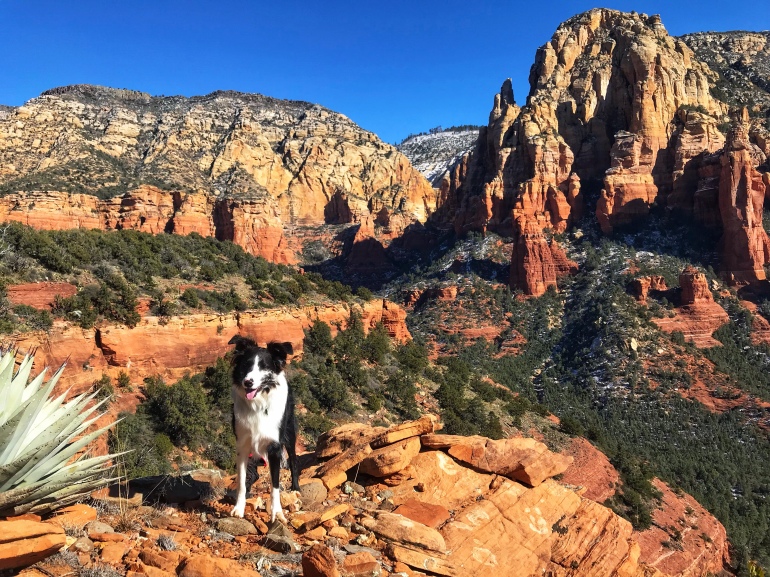 It was a brilliant, sunny day and just what you expect to see in Sedona. Red rock, sun and blue skies! There were plenty of patches of snow that make our pictures look even prettier! 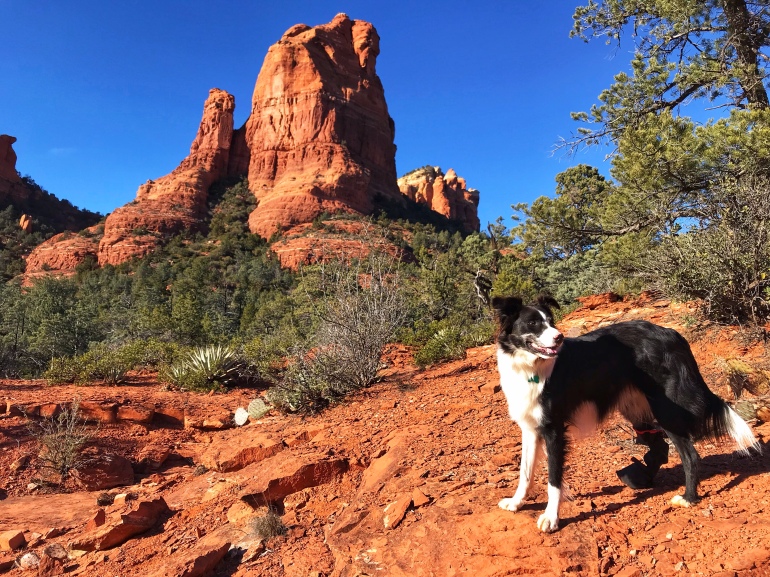 We hiked up to the top of Brins Mesa and spent a lot of time exploring around the top of it and taking pictures looking down into the valley we came up from. It’s just SO PRETTY in Sedona – we now know why everyone loves it! 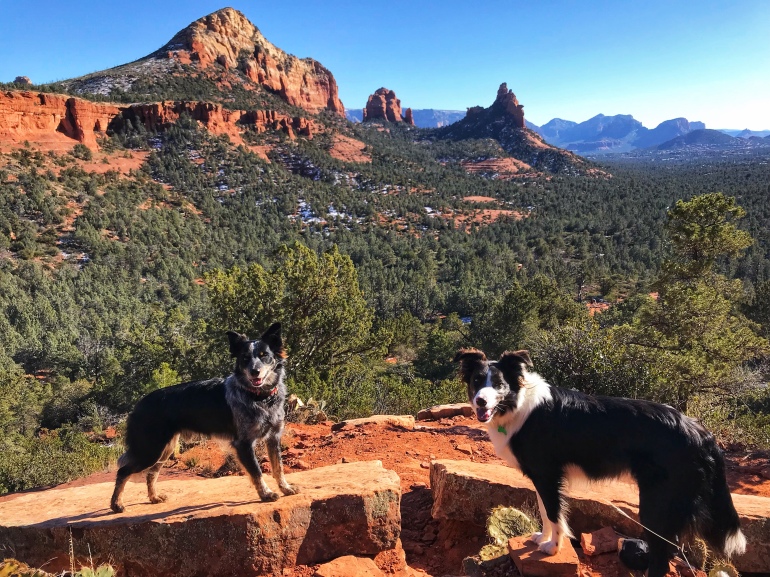 While we were out we bumped into a handful of people who were looking for the seven sacred pools and asked us if we knew where they were. We had never heard of the pools and had no idea what they were, but realized they obviously were pretty cool if so many people were looking for them! So imagine our surprise when we stumbled onto them. 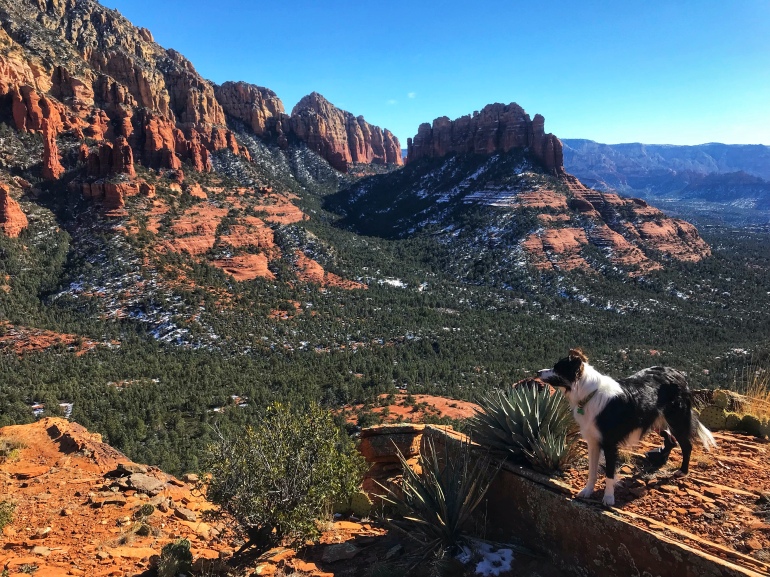 We did get a little lost by following a map that indicated we could make a loop on a trail that no longer existed (or was marked in any way), or it was because it was on the north side of a hill and completely covered in snow. We ended up bushwhacking in the forest for a while before momma convinced daddy we should backtrack all the way out to the main trail and go from there. While it was annoying for them, Lolo and I had SO MUCH FUN exploring in the woods off trail where we had so many great scents to track! 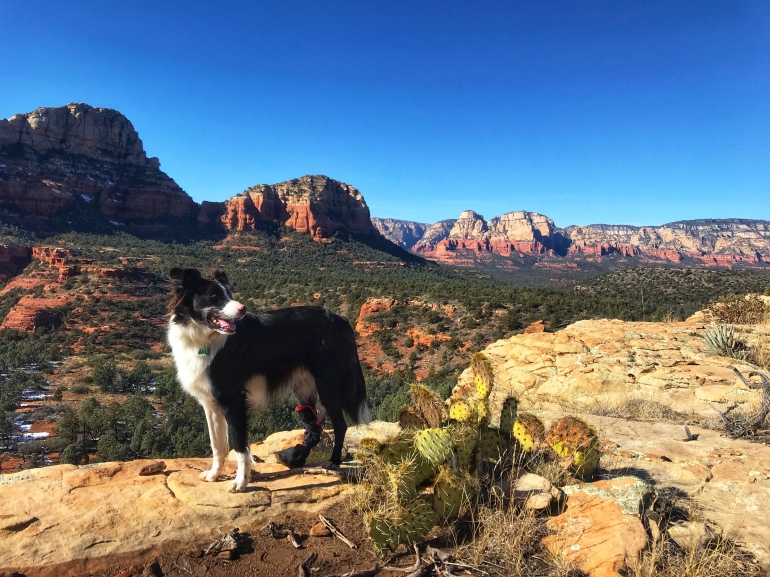 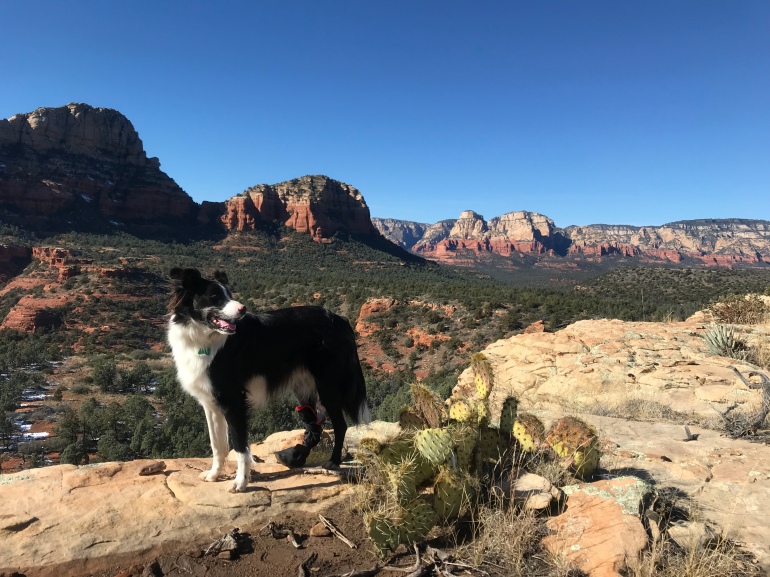 After we were done, we headed into Flagstaff for the night. As we drove north through Sedona the traffic coming south was INSANE. It was a complete line of bumper to bumper cars for miles and miles! I am not sure if it is often like that, but man were we happy to be going in the opposite direction!!

Flagstaff was a shock to the system with lots of snow and it was VERY cold. We were only spending the night to get an early start to head to the Grand Canyon in the morning, but momma had not stayed in a hotel in a few years so she was a little nervous that it would be gross or yucky. It was actually VERY nice! It was a La Quinta and pet friendly. We were on the third floor but Lolo did not like the elevator so we mostly took the stairs.