My momma loves water. She is a bit like Lolo in that she often feels drawn towards it for no reason whatsoever, like a magnet! Unlike Lolo, she doesn’t completely lose her mind when she sees it though! She just appreciates being NEAR it and hearing it. 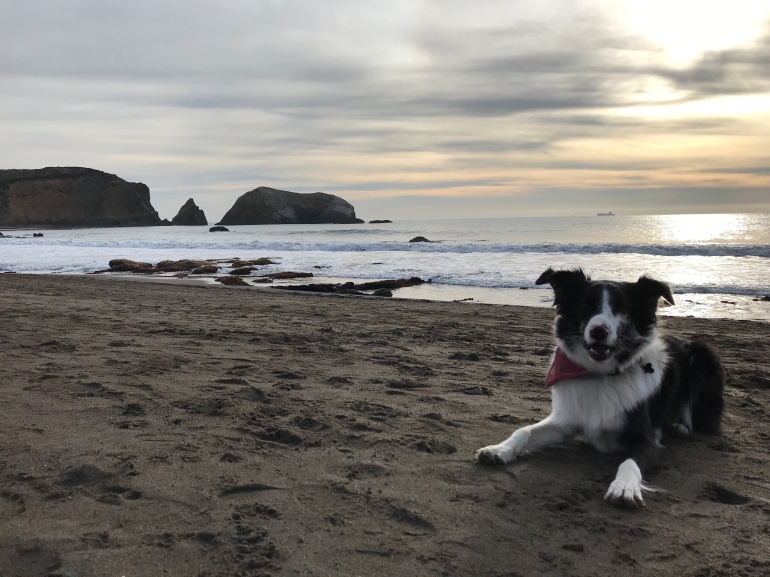 When we lived in North Carolina we lived on a lake so momma got her water fix pretty easily. In the summer here in California we pretty much do all our hiking trips around lakes so that we can swim, cool off and refill our water!

Now that it is winter, we haven’t been picking hikes based on water because, you know, it freezes up in Tahoe! 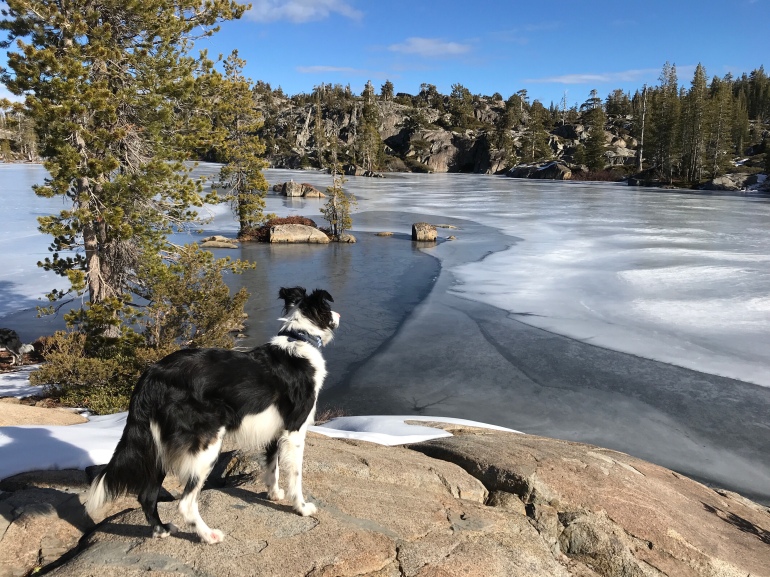 The other day momma woke up and said “I need to go to water” so off to the coast we went.

It’s actually only about an hour and a half to the coast here, although there is a lot of water to cross to get there, and all the traffic seems to get right and jammed up on the bridges!

Momma decided that we would take our daddy on a day trip to the Marin Headlands, which is right next to the Golden Gate Bridge but is NOT the city.

Actually there is a bunch of old WWII bunkers there! Every time we go momma says she should read up on the history there. 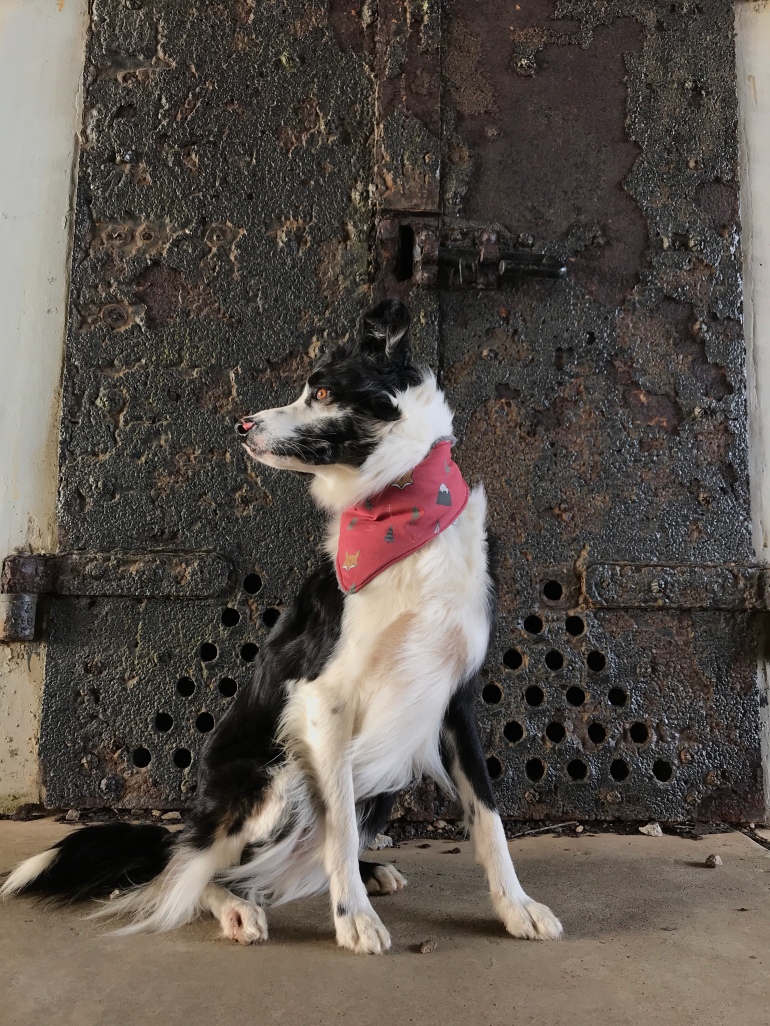 The nice part about this section of land is that dogs ARE allowed here, and they are allowed to be off leash if they are under voice control in some places here, too! So for well-behaved dogs like Lolo and I it is AWESOME.

When we first arrived we went straight to the beach. Now I’m not much of an ocean-loving dog because the water is salty, and when I swim I like to drink. But salt water is GROSS to drink, so therefore I don’t like to swim. 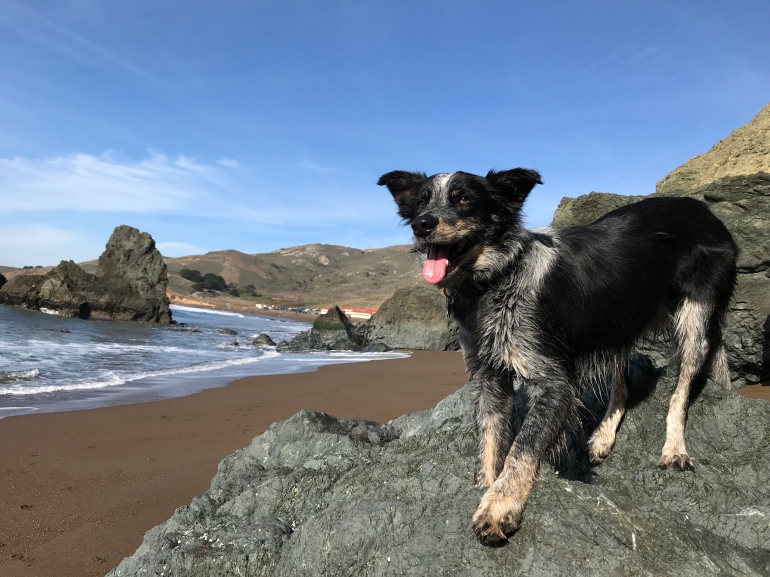 Momma thinks someday I should figure out that you can swim and drink separately, but I think I am just a lot more efficient that way!

After we walked around the beach and said hello to several dogs and people and climbed on the rocks, we started hiking up in the hills. The hikes up there are a little confusing because there are a zillion little trails and you are never really sure if it is a main trail or a dead-end trail to the edge of the cliff.

Momma knows Lolo and I are careful at the edges of cliffs, but daddy doesn’t quite have that level of trust with us yet, so a few times we had to get on leash just to make him breathe a bit easier! 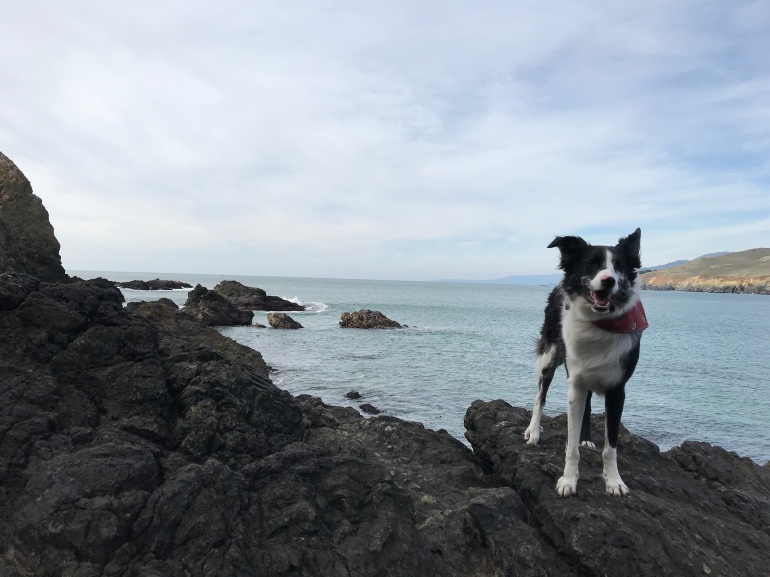 We climbed and explored as we got better and better views down towards the Golden Gate Bridge and San Francisco.

If momma had a better camera than her iPhone which has been dropped a million times (and been to the bottom of Lake Tahoe) you could probably see that scenery in the back of this picture!!

After our hike we went back down to the beach because Lolo wanted to play more ball. Daddy got annoyed though when Lolo dropped his ball and it rolled down into the water and a wave came in and got his shoes all wet! So we left a little bit after that. 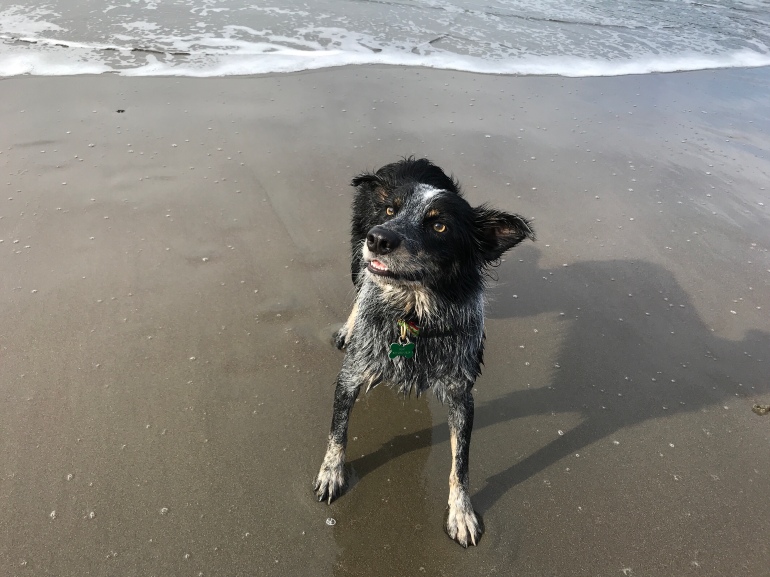 For some reason the tunnel we came in was closed so we had to get in a big line of cars that went up and over a hill to get back to the 101, we were pretty sandy and sleepy in the back but daddy got some very good views of the Golden Gate bridge as we had to take this alternate route. We also now KNOW about other places we can park and maybe take some Golden Gate bridge pictures too – IF dogs are allowed to get out there! 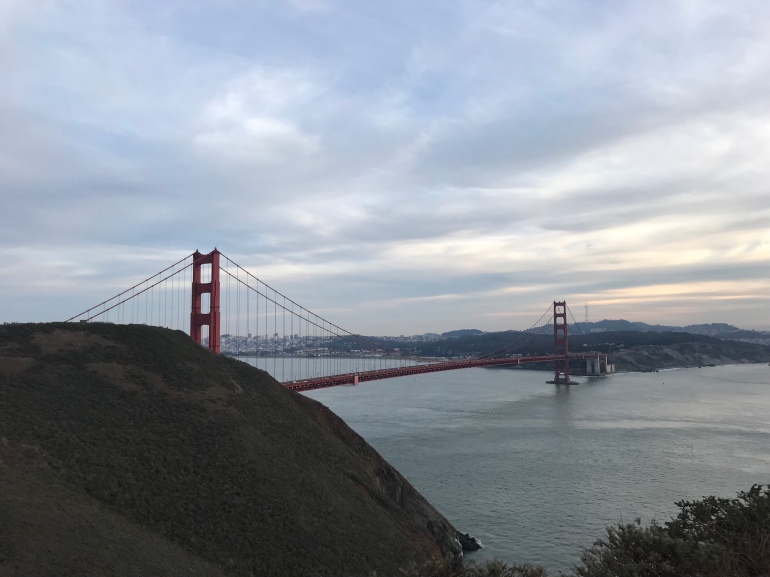 It’s funny – some parts of California are super dog-friendly, like a lot of stores in Davis, people just go on and bring their dogs in along to shop. I’m not just talking about the Pet Food Express – I am talking Trader Joes, Nugget Market and Target! Momma doesn’t take me there though, she says she needs to focus on shopping and not me begging for food from everyone in a place like that! 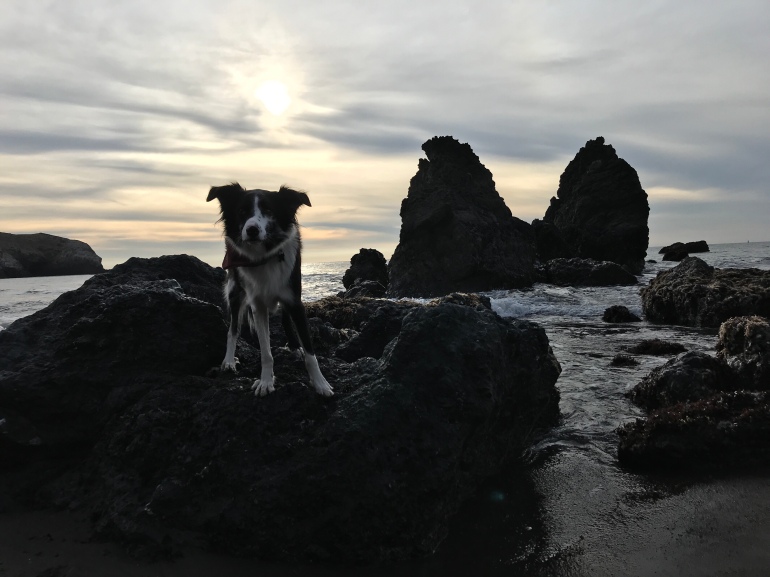 But other parts of California just want NO DOGS ANYWHERE. Including all state parks in California, which is pretty much the opposite of anywhere we have ever lived. Also there are tons of lakes where they don’t want dogs to swim. Even though they let boats with gas and oil and people swim. It makes no sense! So momma doesn’t know that she’d want to stay here forever just because of the dog thing. Good to know she is thinking of us!!!